Democrat presidential candidate Beto O’Rourke’s presidential campaign has been floundering ever since it began. Beto himself proved to be an exceedingly bizarre candidate, and has been forced to reboot his campaign four times in the last six months. In fact, Beto has struggled to poll any higher than 8% since his campaign began earlier this year.

After the mass shooting in El Paso, however, Beto O’Rourke has hit upon what he thinks is a winning formula. Beto has become an open, militant gun-grabber. Where most Democrat candidates at least pay lip service to respecting the Second Amendment, Beto has flat out said that he intends to confiscate Americans’ guns if elected. Beto tripled down on gun confiscation during the Democrat debate Thursday evening.

Now, Beto is looking to cash in on gun confiscation. The O’Rourke campaign is trying to grab some of that sweet, sweet donor cash by selling “hell yes we’re going to take your AR-15” t-shirts on their official campaign website.

Beto’s new shirts, which come in unisex and ladies (what’s the difference?), were received about as well as one would expect.

😂👈🏻 This is an actual picture, of me laughing, in AMERICAN! 🇺🇸 🦅 — Oh Robert, Robert, Robert! I say YOU go into someone’s to “take” it; I’d love to see how that turns out. Pretty please, with cherries on top!

You are an idiot, Robert Francis. 🙄

You’re not taking a damn thing. Here’s my shirt instead. https://t.co/wTTDOoHCzS pic.twitter.com/Yk0bwN5Lao

Unfortunately, there’s nothing new about Beto’s position on gun control. Leftists have always had complete and total confiscation as the ultimate goal when it came to gun control. Usually they moderate their tone for election season. “I support the Second Amendment, but…” is a common phrase we’ve heard from Democrats in the past.

What is new, however, is the fact that Beto is in your face about wanting to take away your guns. He’s reasoned that the best way to save his flagging campaign is to appeal to his far Left base by demanding that Americans give up their guns. After all, that’s the only way to prevent further mass shootings, even though there’s not one shred of evidence gun confiscation will stop anything.

I’m glad that Beto is being open and honest about shredding the Constitution if he’s elected president. It saves President Trump and Republicans the hassle of having to explain what Beto and the Left really want to the American people. Beto’s shrill oath to take away all guns from law-abiding Americans will no doubt become integral to many a Republican campaign ad from now until Election Day.

Personally, I’m looking forward to it. 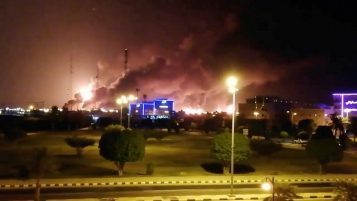