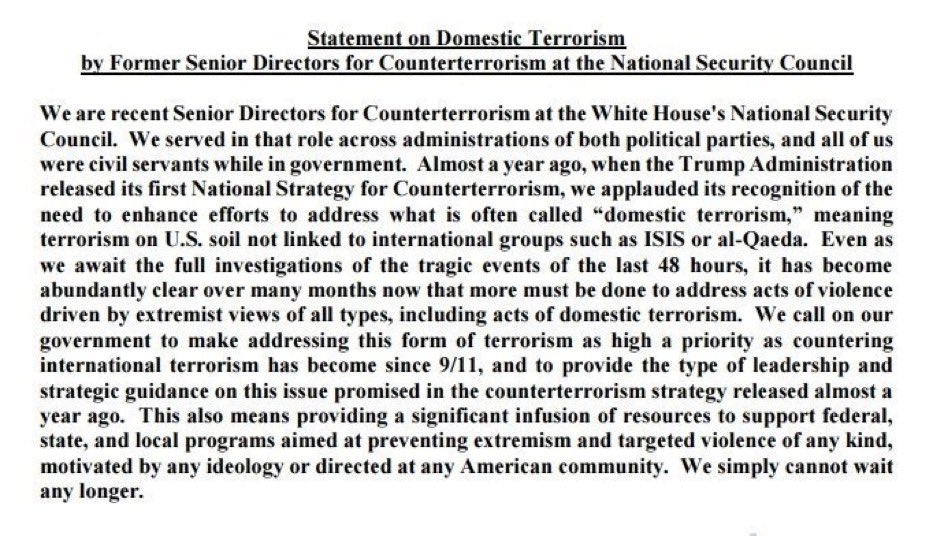 OK. This pisses me off.

Protecting the United States from terrorist attacks is the FBI’s number one priority.

You can’t get any higher than this!

Let’s also grab the FBI’s definition of a Domestic Terrorist so we’re all using the same language.

Domestic terrorism: Perpetrated by individuals and/or groups inspired by or associated with primarily U.S.-based movements that espouse extremist ideologies of a political, religious, social, racial, or environmental nature.
–for example, the June 8, 2014 Las Vegas shooting, during which two police officers inside a restaurant were killed in an ambush-style attack, which was committed by a married couple who held anti-government views and who intended to use the shooting to start a revolution.

And by way of background, you may remember that FBI Director Wray testified last month that the FBI made about 100 domestic terrorism-related arrests since October, and the majority were tied to white supremacy.

”I will say that a majority of the domestic terrorism cases that we’ve investigated are motivated by some version of what you might call white supremacist violence, but it does include other things as well,” Wray said at a Senate Judiciary Committee hearing, referring to cases in fiscal 2019, which began Oct. 1.

Here’s what I’m pissed about. Once again we have the people whose job it was to develop solutions for domestic terrorism telling us that they didn’t do their job but someone should fix the problem.

There are a couple realities in my view:

Since this is an opinion piece, let me give you my opinion — young people do not all of the sudden decide that their lives are worthless and to create some worth, they must kill themselves along with a bunch of other people. This is something that takes years and years to develop.

It’s fundamentally different to go to war for your ideals with the intent of creating a better world for yourself, your family, and your country and committing suicide to do so. The closest we’ve seen are the Japanese kamikazes of WWII.

This, therefore, is not a “mental health” issue. For whatever reasons, it’s a lifetime of hopelessness in the middle of a period of great prosperity. It’s also a feeling of helplessness in a country that has total freedom for you to stake your own path.