I found a great article by Bill Girdner at Courthouse News titled Moth and Flame. Like a lot of Leftists, he starts off well but TDS soon takes over. Sorry, Bill, when you call the President the “The Orange One,” I gotta call you out.

But Bill does make some excellent points and with a little deprogramming, he might even get over his TDS at some point.

I once met a racist.

He was the son of one of my mom’s friends, young guy. He hated black people and it was a recurring subject of his conversations and jokes. He had a young daughter, maybe 11 years old, who was a little bit brown-skinned. He had taught her to flirt with him.

When you meet a racist, it is something you know and you don’t forget. I look upon that virulent strain of hatred as a manifestation of evil.

Indeed, Bill. I do worry, however, that things that were once at worst rude are now “racist” making a person a target as someone who is the manifestation of evil. As a young engineer, the term “Afro-engineering” was only mildly shocking. If anyone had objected, I would have apologized and stopped using it in their presence. I assure you I am not the manifestation of evil except, perhaps, to a few people here that think I should be more of a True Conservative TM.

There has been much ventilating, much exercising of the extremities, among the press corps on this subject. The question is whether to call the president racist, or more commonly to describe his words as racist.

And some including the Associated Press and the Washington Post have officially decided that some of his words are indeed racist.

I disagree. The Orange One is a master manipulator, not in order to achieve legislative goals like Lyndon Johnson, but to rile up his crowd, to denigrate and mock. He uses phrases to fan the flames of division on culture, race and what our nations stands for.

Bill, Bill, Bill. You were so close to getting it right! President Trump does what he does PRECISELY to advance a legislative agenda!

It leads to the death of analysis. In that bright orange glow, the strategic and methodical undoing of social legislation stays in the shadows.

The quiet undoing of a rule making it more difficult for the mentally ill to buy firearms, for example, goes largely unnoticed. The unrelenting campaign to undo environmental protections is not much talked about. The move by Senate Republicans to gut federal protection of water flows was covered by Courthouse News but otherwise ignored.

I’m glad we agree except on whether these changes are good or bad. You say bad and I say good. That’s fine and we can argue the details if you like. You might even convince me that these are bad policies. However, what the President has done is to daily direct the press narrative to a direction away from what he’s doing and toward himself. President Trump has absolutely nothing to gain politically which the press also doesn’t appreciate. All that’s important are results and twenty years from now people are going to ask “what’s Twitter?”

So, for the love of all that is dear, I think we should stop worrying about the particular descriptor we use to describe the president’s insults and instead see and report on the great change that is being wrought in our society.

I’m all for that, Bill, particularly because I believe we have the better arguments on our side that are based in the law, the Constitution, and intellectual honesty.

Just a reminder, Bill, that the door swings both ways in this regard as you accurately, although perhaps unwittingly, point out. In my view, the Left is much more guilty of this than the Right simply because the Left seems to believe that for every problem, there is a federal government answer.

I’d appreciate it if you keep your new found insight to yourself. Oh, hell. What do I care? Your colleagues on the Left will probably think you’re as loonie as I am! 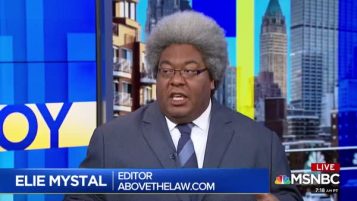