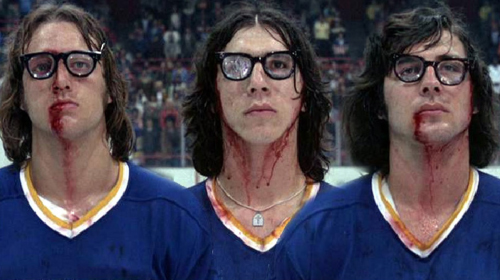 There’s a great video clip of a minor league hockey coach laying down the Old School Law on the first day of training camp in this post over at Breitbart (NSFW):

A hockey coach in Connecticut gave his players a locker room talk in which he told them that they would stand for the American and Canadian anthems, or they could “get the f*ck out.”

The video, posted to Facebook last month, shows minor league hockey coach Dan Krupinsky of the Hat Tricks making it clear to his players that “respect” for the anthems is expected.

“We’re not women’s soccer. We’re not the NFL,” Krupinsky said. “If there’s anybody here who is going to be disrespectful to either the American or the Canadian national anthem, grab your gear and get the f—- out now because you’ll never see the ice in this arena.”

“We don’t have that problem in hockey. We’re better than that, but there was no sense in wasting anybody’s time if that shit was going to happen.”

Seems the coach is channeling Reggie Dunlap & The Hanson Brothers: