….they are destroying the Democrat Party. I’m appalled that so many of our Presidential candidates are falling all over themselves to try to agree with the four horsewomen of the apocalypse. I’m entitled to say that they’re Wack Jobs.” Louisiana Senator John Kennedy

President Trump, at a fiery “Make America Great Again” campaign rally Wednesday night in Greenville, North Carolina, blasted four progressive congresswomen, Reps. Ilhan Omar of Minnesota, Rashida Tlaib of Michigan, Alexandria Ocasio-Cortez of New York and Ayanna Pressley of Massachusetts, with whom he continues to spar after an ongoing feud over comments he made against them that critics deemed “racist.”

“Let ’em leave… they’re always telling us how to run it, how to do this, how to do that. You know what? If they don’t love it, tell ’em to leave it,” Trump said of the congresswomen, doubling down on similar comments he made on Twitter earlier in the week.

Trump slammed Omar on Wednesday saying she “smeared U.S. service members in ‘Black Hawk Down.’ She slandered the brave Americans trying to keep peace in Somalia,” a dig at her Somali-American heritage.

Meantime, many in the crowd shouted, “send her back.” Omar later responded by quoting Maya Angelou.

Trump moved on to his critique of Tlaib, saying she “used the F-word to describe the presidency and your president.”

“That’s not nice, even for me,” Trump said. “That’s not somebody who loves our country.”

The president then took aim at Ocasio-Cortez, whom he mocked for her “three different names,” saying she inaccurately described the migrant holding facilities at the southern border as concentration camps.

At the top of his remarks Wednesday night, Trump celebrated the House’s decision to shelve impeachment proceedings against him.

“I just heard that the United States House of Representatives has overwhelmingly voted to kill the most ridiculous project I ever worked on,” Trump said, referring to an impeachment resolution proposed by Rep. Al Green, D-Texas, that was widely opposed by House Speaker Nancy Pelosi, D-Calif., and other top Democrats.

“The resolution– how stupid is that– on impeachment.”

Trump called the 332-95 vote to sideline the impeachment resolution Wednesday “totally lopsided” and instead touted the strong economy and low unemployment numbers under his administration.

This past Sunday, Trump called for the progressive congresswomen to “go back and help fix the totally broken and crime infested places from which they came. Then come back and show us how it is done.”

The four congresswomen Trump apparently referenced are all American citizens and three of them were born in the United States.

The congresswomen, along with several other lawmakers, condemned the statements as racist and Trump fired back saying “Those Tweets were NOT Racist. I don’t have a Racist bone in my body!”

Ocasio-Cortez rebutted the president Tuesday, saying, “You have a racist mind in your head, and a racist heart in your chest. That’s why you violate the rights of children and tell the Congresswomen who represent your home borough, to ‘go back to my country.'”

By the time you read this post on Thursday morning. the minions of the Far Left Democratic Party, the MSM, political pundits, and self-identifying “Moderates”, too, will be whining to everyone who will listen as to how Trump is losing voters by attacking the Four Horsewomen of the Apocalypse, as I have been calling them since this whole dust-up started.

Considering that rasmussenreports.com showed yesterday that Trump had actually gained popularity, coming in at 50%, I would say that blows that theory all to Hades.

As I wrote yesterday, what Trump has done is to make 4 anti-American radicals the face of the Democratic Party.

As I sat down to write this post last night, after watching the MAGA Rally in Greeneville, another revelation hit me.

The President, in a brilliant move of political ju jitsu, used the Democrats’ favorite playbook against them.

Democratic Politicians, as exhibited by Former President Barack Hussein Obama and Failed Presidential Candidate Hillary Clinton use Saul Alinsky’s “12 Rules for Radicals” as one of their primary sources for political campaign strategy, whether it be for obtaining a political office or championing a cause.

“Pick the target, freeze it, personalize it, and polarize it.“ Cut off the support network and isolate the target from sympathy. Go after people and not institutions; people hurt faster than institutions.”

By attacking the Four Horsewomen, Trump forced them to self-identify as Radicals.

Not only that, but he caused the House Dems to publically proclaim their support for them, thus identifying them as Radicals also in the eyes of Americans.

And, he got the Democrats stirred up so much that they, as Obama would say, “acted stupidly” by going ahead with another Impeachment Vote, which failed spectacularly.

Then, he put a lovely bow of the whole situation as if is was a Christmas Gift by quoting all of the anti-American things which the Four Horsewomen had said and laughing at the House Dems for attempting to impeach him, again.

Finally, after showing how the Democrats are not doing anything worthwhile with their majority in Congress, he listed all of his great accomplishments as President, so far.

He isolated the Four Horsewomen from the majority of Americans, first, and then he went after the institution known as the Democratic Party. 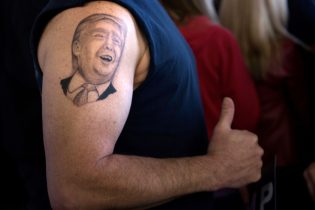