Eddie Gallagher had been accused of stabbing an ISIS prisoner to death during a deployment to Iraq in 2017. Gallagher’s own men had described him as a murderer who refused to distinguish civilians from enemy combatants.

Gallagher had been arrested September 11, 2018 and held shackled in solitary confinement for 72 hours. He was accused of murder and attempted murder.

Today, however, the jury in Gallagher’s trial found him not guilty of the most serious charges. Gallagher was convicted of unlawfully taking a picture with the corpse of the ISIS fighter that Gallagher had been accused of killing.

Gallagher’s trial is probably one of the strangest cases I’ve heard of in quite some time. It seems clear from the outset that the prosecution had a narrative they wanted to establish regardless of the actual evidence. The prosecution went so far as to spy on Gallagher’s defense team:

Gallagher’s case took a dramatic turn before the trial even started when it was revealed in May that prosecutors had embedded email tracking software in their correspondence with Gallagher’s defense team. The revelation outraged lead defense attorney Timothy Parlatore, who told the Washington Examiner he would be filing an ethics complaint against lead Navy prosecutor Cmdr. Chris Czaplak. Navy Capt. Aaron Rugh, the judge overseeing the case, dismissed Czaplak over the revelations and released Gallagher from pre-trial custody. He also lowered Gallagher’s maximum possible sentence to life with the possibility of parole. He denied motions to dismiss the trial.

The most shocking twist in Gallagher’s trial, however, is probably the moment when one of the prosecution’s star witnesses, a man who had been given immunity, testified that he was the one who had killed the ISIS fighter:

The testimony against Gallagher appeared damning, but the case took an unexpected turn when Special Warfare Operator 1st Class Corey Scott declared it was he, not Gallagher, who was responsible for the death of the injured teenage fighter. Scott admitted to seeing Gallagher stab the teen but said he himself asphyxiated the fighter in an effort to save him from Iraqi captors, who he had seen torture, rape, and kill other prisoners.

“I knew he was going to die anyway,” said Scott, a trained combat medic. “I wanted to save him from waking up to what had happened next.”

The shocking revelation caused a flustered Navy prosecutor to call Scott a liar. Navy officials later informed Scott through his lawyer that he may face perjury charges if he lied to investigators or during his testimony.

Everything that I’ve read on this case says justice was served today. Now at least Eddie Gallagher can try to put this bizarre nightmare behind him. 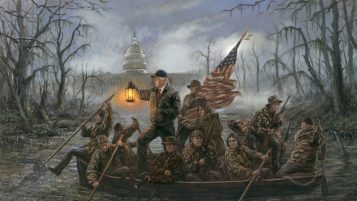