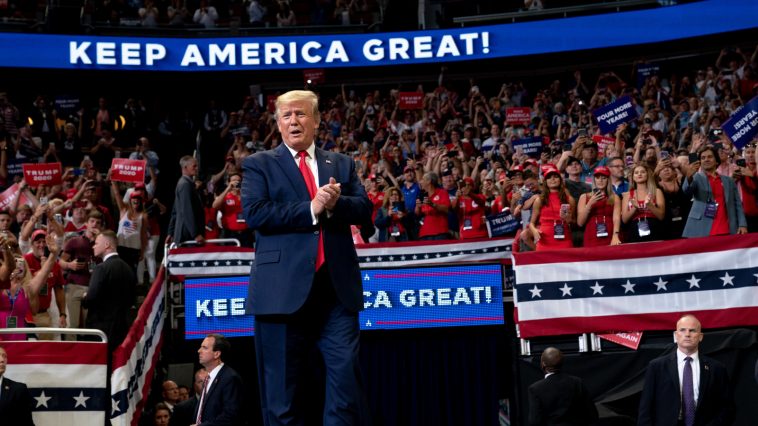 Don’t ever forget – this election is about YOU. It is about YOUR family, YOUR future, & the fate of YOUR COUNTRY. We begin our campaign with the best record, the best results, the best agenda, & the only positive VISION for our Country’s future! #Trump2020 pic.twitter.com/Vmu28hKQh6

President Trump formally launched his 2020 re-election campaign Tuesday night before a jam-packed crowd in Orlando’s Amway Center arena, and quickly unloaded on the media organizations and government actors he said tried their hardest with “everything they had” to bring down both his candidacy and presidency.

To chants of “USA,” Trump took the stage after brief remarks by Vice President Mike Pence and first lady Melania Trump, and recalled his unlikely rise to power.

“We stared down the unholy alliance of lobbyists and donors and special interests who made a living bleeding our country dry,” Trump said. “The swamp is fighting back so viciously and violently. For the last two and a half years, we have been under siege.”

With some help from the boisterous crowd as the rally continued, Trump appeared to settle on a new campaign slogan: “Keep America Great.”

He went on to tout the economy and the planned Space Force, celebrate the “obliteration” of ISIS, and declare that “Republicans believe that every life is a sacred gift from God” amid a newly energized national pro-life movement.

Just over four years ago, Trump descended through the pink marble and brass atrium of Trump Tower to announce his candidacy for president, the first step on a journey few analysts believed would take him all the way to the White House.

This time, thousands of Trump supporters arrived more than 40 hours in advance to secure a spot in the Amway Center, despite sweltering heat. Some had been camped in chairs for several nights.

Trump told attendees he had begun not only a “great political campaign but a great movement” committed to the idea that a government must “care for its own citizens first.”

He called his election that year as a “defining moment in American history” — and then directed the crowd to “ask them, right there,” referring to the media assembled in the back, which many in the crowd jeered.

In one of the most dramatic moments of the rally, Trump charged that Democrats want a “do-over” of Special Counsel Robert Mueller’s report — and then, his voice approaching a shout, Trump blasted Democrats’ apparent lack of interest in misconduct within their party.

“Our patriotic movement has been under assault from the very first day,” Trump said. He specifically called out the “phony” dossier used by the FBI to secure a secret surveillance warrant to surveil one of his former aides, Carter Page.

After Trump noted that the dossier was funded by the Hillary Clinton campaign and Democratic National Committee (DNC), the crowd again broke into a chant, this time cheering, “Lock her up.”

“If you want to know how the system is rigged, just look at how they came at us for three years with everything they had, versus the free pass they gave to Hillary and her aides after they set up an illegal server, destroyed evidence, deleted and acid-washed 33,000 emails, exposed classified information, and turned the State Department into a pay-for-play cash machine,” Trump said, his voice rising with the crowd’s.

“Lock her up,” the crowd responded again.

“33,000 emails deleted, think of it!” Trump said. “You know, there was a lot of corruption on the other side. But, you know, they get a subpoena from the United States Congress, and they decide they’re not gonna give it, so, Lindsey Graham, they delete and they acid wash — which is very expensive, nobody does it — those emails, never to be seen again!

“But we may find them again somewhere deep in the State Department,” Trump mused. “Can you imagine if I got a subpoena? Think of this — if I deleted one email, like a love note to Melania, it’s the electric chair for Trump.”

For the most part, the rally focused on Trump’s policy successes, on a range of matters including criminal justice reform and the economy.

“Our country is soaring to incredible new heights,” Trump asserted, to loud applause. “Our economy is the envy of the world, perhaps the greatest economy we’ve had in the history of our country, and as long as you keep this team in place — we have a tremendous way to go — our future has never, ever looked brighter or sharper.”

Trump continued: “The fact is, the American Dream is back. It’s bigger, and better, and stronger than ever before.”

…The festive and lively environment was evident both outside and inside the arena. Caps and shirts and mugs and ponchos were being hawked in corners far and wide in Orlando, with slogans ranging from “God, Guns and Trump” to “Trump’s Deplorables” to “Working to Defeat Liberals since 1854.”

“Think of this — if I deleted one email, like a love note to Melania, it’s the electric chair for Trump.”

…Trump is ahead of his Democrat rivals in key battleground states and “voters overall” support re-electing him, a Republican National Committee (RNC) memo obtained by Fox News claimed.  The memo came amid reports of the president struggling in polls putting him up against potential 2020 opponents, including Biden. A Fox News poll showed similar numbers.

But, according to the RNC, its own massive data operation told a different story. According to the committee’s numbers, Trump has a higher approval than disapproval rating in the battleground states of Ohio and Pennsylvania while a majority of Florida voters (53 percent) supported re-electing him.

Before I begin, please allow me to tell you that I am no political pundit.

I am just an average guy who began writing back in April of 2010 in order to vent my frustration with the destruction of the America being wrought by President Barack Hussein Obama (mm mmm mmmm) and his Democrat henchmen and women in Congress.

Last night, American Citizens from coast to coast heard from a man who genuinely LOVES America and her people, instead of viewing us all as racist, misogynist, xenophobes…the 45th President of the United States of America, Donald J. Trump.

The reason being, President Trump is keeping his promises, as he reminded us last night.

That is why the Democrats continue to attempt to impeach the president without actually impeaching him.

Last night, the President of the United States of America, the most powerful man in the world, made the average Americans whom the Democrats named “Deplorables” feel good about ourselves and our role in determining our future, unselfishly giving us the credit not only for his victory on November 8, 2016 but for our support of his Domestic and Foreign Policies which has caused an unprecedented economic recovery which has benefited all Americans.