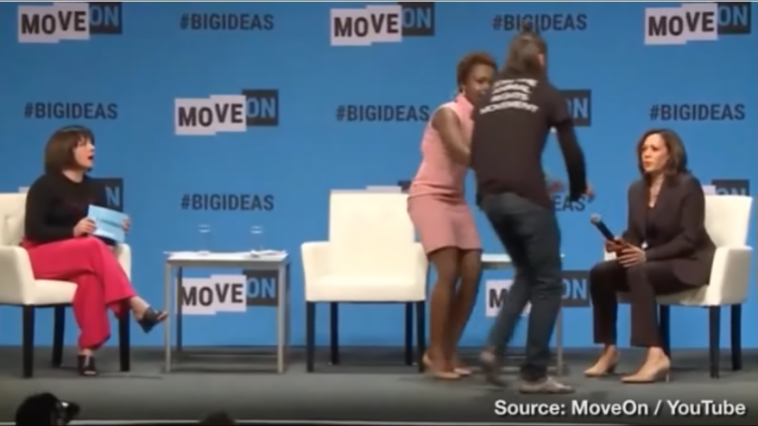 Before we get started, yes, I deliberately chose the most ridiculously provocative title I could think of for this article. You’ll see why in a few moments.

Democratic presidential candidate Kamala Harris was speaking at the Big Ideas Forum hosted by MoveOn Saturday in San Francisco. During a Q&A session a protester managed to gain access to the stage, and took Kamala’s mic from her hands.

I’ve seen this incident described as an “attack.” I’ve seen people call it “scary” and “jarring.” I’ve seen people saying that this protester “rushed the stage.” In fact, to hear some people talk you’d think Kamala Harris just survived the most harrowing experience of the 2020 campaign thus far.

The protester, by the way, is uber-Leftist Aidan Cook. Cook, a member of the animal rights group Direct Action Everywhere, took Kamala’s microphone in an effort to draw attention to the plight of “ordinary citizens rescuing animals rather than the factory farms that abuse animals.”

I asked Aidan Cook, an animal rights activist who jumped onstage to interrupt Kamala Harris, if he had considered the optics of literally taking the microphone away from women of color.

“I did,” he said. “I tried to show my profound respect for each of the people onstage.” pic.twitter.com/uyMpV82lVP

Now that I think about it, I probably didn’t need to tell any of you that Mr. Cook is a Leftist. Those skinny jeans and that soy boy man bun sure as shootin’ don’t scream “MAGA Country.”

In reality this event was far from the brush with death that many on social media are making it out to be. The look on Kamala’s face was confused rather than frightened. You can actually see her handing the microphone to Mr. Cook as he approaches. Obviously, she had no idea what was going on.

There are two things that I will say about this incident. First, I think Kamala Harris handled the incident quite well. She kept her cool, and followed the directions of security when they (finally) ushered her off the stage. Once the coast was clear, Harris came back on stage laughing at Cook’s antics.

Anyone who knows me, has read any of my articles, or listened to any of my podcasts knows just how hard it is for me to say anything positive about Kamala Harris.

Second, speaking of security, where the hell were they? Aidan Cook didn’t “rush the stage.” He strolled casually onto it and right up to a presidential candidate. How in the world did they not see this guy coming? Why did it take so long for security to get Kamala off the stage? Seriously, I have no love for this woman, but the question “what if he was dangerous” definitely has to be brought up.

Hopefully someone got fired for this fiasco. It shouldn’t be that easy to approach a presidential candidate regardless of their party.