Sleepy Joe has a fondness for the taste of shoe leather.

Former Vice President Joe Biden, the frontrunner among 2020 Democratic candidates, agreed with a supporter who blasted Donald Trump’s presidency — and called it “illegitimate” — during a fiery rant at his latest campaign stop.

“He is an illegitimate president in my mind. That’s it,” the woman, who said she had “a very severe case of what’s called Trump derangement syndrome,” told Biden.

“He’s illegitimate and my biggest fear is that he’s going to do it again with the help of Vlad, his best pal, and we’re going to be stuck for six more years with this guy, and that is terrifying, it’s terrifying,” she said, mentioning Russian president Vladimir Putin.

Biden responded by jokingly asking if she would be his vice presidential candidate. In a seemingly more serious tone, Biden said, “folks, look, I absolutely agree.”

Her comments also included a call for all 2020 candidates to unify behind a message that claimed, among other things, Trump won the 2016 election with Russia’s help. “I don’t want to live in a country run by Vladimir Putin. I don’t think anybody should want that,” she added.

Biden told the woman that in order to help Democrats win, he wouldn’t “speak ill” of another Democratic candidates. “We have to be in a position, whomever the nominee is, to be able to win,” he said.

Biden has a history of making comments potentially damaging to his political career. For example, he told a Chinese university audience in 2011 that he “fully” understood their one-child policy.

The former vice president also faced scrutiny over a 2006 video, resurfaced in May, showing him advocating for a border wall and punishment for employers who hired illegal immigrants.

Biden’s Tuesday comments came after weeks of turmoil surrounding Special Counsel Robert Mueller’s report which highlighted what some considered to be troubling activity by Russians. The report did not, however, conclude the Trump campaign conspired with the Russians to influence the election.

While Democrats have continued investigating potential obstruction of justice under Trump, the Justice Department probed the Russia investigation’s origins and whether the former administration improperly surveilled Trump’s campaign.

Why did Biden agree that Trump’s Presidency is “illegitimate”?

Because it is all that he’s got.

I mean, what is he going to run on, the success of Obama’s Presidency?

If the American public believed that Obama did a great job as president, Hillary Clinton would have been elected to succeed him.

When you say that to a Democrat, of course, they will bring up the “Popular Vote” argument.

And, of course, the answer to that is the fact that we are not a mob-ruled Democracy. We are a Constitutional Republic and Trump won an overwhelming majority of states, giving him the Electoral Votes he needed.

Our Founding Fathers, in their infinite wisdom, created this Blessed Land as a Constitutional Republic in order to provide fair and equal representation to all areas of the country, whether they be densely populated “urban” areas or sparsely populated “rural” areas.

No American’s vote is more important than somebody else’s.

When I voted down here, outside Memphis, Tennessee, in the Northwest Corner of the Magnolia State on November 8, 2016, it counted the same as a Democrat voting in one of the boroughs of New York City.

The Founders created and put in place the Electoral College in order to prevent just what the “Democratic Socialists” in the New Far left Democratic Party have been crying for since they lost the 2016 Presidential Election: a nation where its leaders are selected by mob rule in which special interest groups of a minority political philosophy joined together to form a voting bloc in order to “radically change” the course of a Sovereign Nation.

One of our Founding Fathers, James Madison, explained in no uncertain terms why he and his fellow patriots did not form our Sovereign Nation as a “democracy”…

[In a pure democracy], [a] common passion or interest will, in almost every case, be felt by a majority of the whole; a communication and concert results from the form of government itself; and there is nothing to check the inducements to sacrifice the weaker party or an obnoxious individual. Hence it is that such democracies have ever been spectacles of turbulence and contention; have ever been found incompatible with personal security or the rights of property; and have in general been as short in their lives as they have been violent in their deaths

Madison, who would go on to become president, was a prophet.

He not only predicted the problems of governing by “democracy”, he predicted the flaws in Marxist Theory, including the “Democratic Socialism” which the Democrats are advocating.

With the Mueller Investigation ended and the toothless House Committees trying to get Trump on something…ANYTHING…proving to be ineffectual, I look for the Democrats to start pushing for the “Popular Vote” again as most of them feel the same way about Trump’s Presidency as Sleepy Joe does.

There are three problems with that.

First, the Senate would block it.

Second, if Sleepy Joe is the best candidate they have, they will lose the Popular Vote in 2020.

Third, if Inspector General Horowitz’s Report and Attorney General Barr’s Investigation come back the way it is believed that they will, the Democrats won’t be able to win a election for Dogcatcher…much less for President of the United States of America. 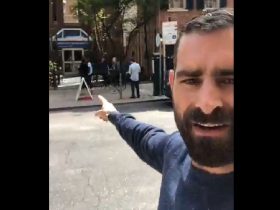