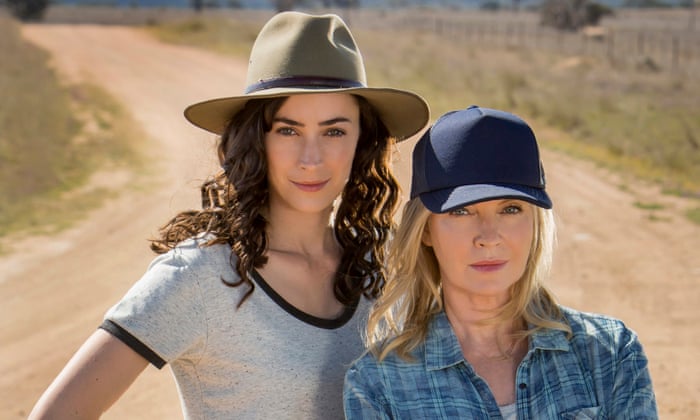 The Innocent Man on the Run genre has been around since the days of black & white over-air broadcast televison – specifically since the original Fugitive Dr. Richard Kimball began The Hunt for The One Armed Man.

The Good Doctor stayed one step ahead of his dogged pursuer,  Lt. Philip Gerard, for over a hundred episodes before bein vindicated.

In the 21st century version our falsely accused hero was one Michael Scofield – and his Prison Break exploits crisscrossed the USA, Olde Mehico and the Central American juntalands.

Always on the run from a passel of vile Deep State lizards, the cliffhangers were plentiful and  mostly entertaining.

The ones Wanted this time are a mismatched pair of gal pals – streetwise fifty-ish Lola Buckley and twenty-something rich girl Chelsea Babbage.

Standing at an isolated Sydney bus stop after hours they have the misfortune to witness a bad-cop drug & cash transaction that goes wrong and puts them on the run from both the cartel and the coppers.

It’s pretty standard genre fare made fresh by the distaff pair and their seat-of-the-pants hi-jinks and skin-of-the-teeth escapes.

It’s good fun and while often predicable the Aussie gals who star carry the show with great aplomb.

Also, it’s mild on the blood and cussing so the Tender Eared & Squeamish will probably tolerate it just fine.

All three seasons of Wanted are presently streaming on Netflix; you can probably track it down on pirate broadcast platforms as well.

(Note: I’ve been on an Aussie binge lately: Rake, Secret City, Pine Gap and now Wanted. All of them are recommended.)