President Trump tweeted a hilarious Game of Thrones-style meme on Thursday in celebration of the release of the long-awaited Mueller report.

Special Counsel Robert Mueller announced in his report that he was unable to find evidence of Russia collusion or obstruction of justice. In other words, the Mueller report completely exonerated President Trump, and proved beyond a shadow of a doubt that Russia collusion was a hoax.

The Leftists over at HBO, the network which produces Game of Thrones, didn’t like the fact that President Trump tweeted a meme with a typeface similar to the one they’ve used to promote the show in the past.

HBO released a statement to the Leftist website Mashable, stating: “Though we can understand the enthusiasm for Game of Thrones now that the final season has arrived, we still prefer our intellectual property not be used for political purposes.”

Leftist HBO is upset that President Trump is using their typeface to troll the Left over the Mueller Report…but they had no issues when Leftists put out this meme.

HBO didn’t have any problems with the Obama administration photoshopping the Iron Throne into a pic taken in the Oval Office either.

It’s very telling that HBO has an issue with President Trump using the Game of Thrones typeface (something which can’t be copyrighted, by the way), but they’re a-okay with Leftists using that same typeface, and even scenes from the show, to troll the president.

That’s Leftism for you, though. They would have no standards at all if it wasn’t for double standards. 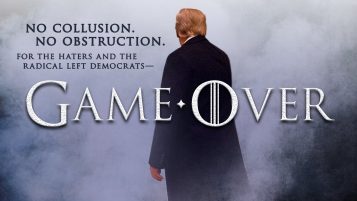