We’re learning more details about the horrific terror attacks in Sri Lanka that took place earlier this morning. Over 200 people were killed and hundreds wounded when suicide bombers struck several sites across Sri Lanka. The bombers targeted hotels and churches, and many of those killed and wounded had been attending Easter Sunday services.

Authorities have said that the bombers timed their attacks to inflict the maximum amount of carnage. Nowhere was that more true than at the Cinnamon Grand Hotel in Colombo.

It was there that a suicide bomber struck while people were enjoying an Easter meal:

The suicide bomber waited patiently in a queue for the Easter Sunday breakfast buffet at Sri Lanka’s Cinnamon Grand hotel before setting off explosives strapped to his back.

Carrying a plate, the man, who had registered at the hotel the night before as Mohamed Azzam Mohamed, was just about to be served when he set off his devastating strike in the packed restaurant, a manager at the Sri Lankan hotel said.

“There was utter chaos,” said the manager, who spoke to AFP on condition of anonymity as he is not allowed to speak for the company.

The Taprobane restaurant at the hotel was having one of its busiest days of the year for the Easter holiday weekend.

“He came up to the top of the queue and set off the blast,” he added.

“One of our managers who was welcoming guests was among those killed instantly.”

The bomber also died. Parts of his body were found intact by police and taken away.

Authorities have not released any information about who may have coordinated the attacks. Sri Lanka is currently under curfew and a social media blackout.

No group has yet claimed responsibility for the blasts. 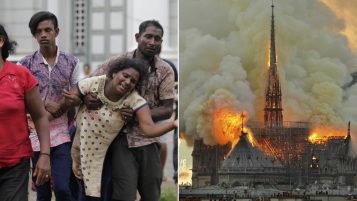