Investigative journalist Sarah Carter is reporting that multiple government sources are telling her that former FBI agent Peter Strzok might be facing “serious charges” stemming from his involvement in the Hillary Clinton email investigation and the Trump campaign spy scandal:

Further, sources contend that the nearly year long investigation by DOJ Inspector General Michael Horowitz, will reveal explosive information and shed light on alleged malfeasance by FBI and DOJ officials directly involved in the Russia investigation. The Inspector General’s report may be completed as early as May or June, according to testimony provided this week by Attorney General William Barr.

Strzok who has already been investigated by Horowitz for his role in the FBI’s Clinton investigation is also expected to be named in the IG’s upcoming report on how the Russia investigation was handled by the FBI. He was removed from Special Counsel Robert Mueller’s team in 2017 and then fired from the FBI in August, 2018. He was fired by the FBI after an extensive review by  Horowitz’s office into the FBI’s handling of the Clinton investigation and was removed from Mueller’s team after the IG discovered his anti-Trump text messages to his paramour former FBI Attorney Lisa Page.

“There are a number of individuals who are looking at Peter Strzok’s actions and inactions and how those actions affected both of the investigations he was involved in,” said a U.S. official, with knowledge. “Further evaluation of what Peter Strzok did or did not do needs to be evaluated thoroughly.”

The official did not reveal what Strzok’s “actions or inactions” may have been but said “obstruction, is a serious concern.”

Strzok “is in hot water,” said another government official, with knowledge. “I’m certain he’s not the only one.”

Sarah Carter’s sources seem to be very confident that Peter Strzok and others will finally be made to face the music for what they’ve done. Personally, I’m less optimistic that many of the actors in the attempted slow coup to overthrow the duly elected President of the United States of America will see the inside of a jail cell. There have been, however, some encouraging developments.

First and foremost is the fact that former FBI attorney Lisa Page seems to be cooperating into the inquiries surrounding the anti-Trump text messages she and Strzok sent each other. I always got the impression that Page was the smarter of the two. It’s not that much of a stretch to assume that Page saw the writing on the wall and realized that she and Strzok had screwed up bigly. I imagine her cooperation is probably an attempt to avoid or minimize any jail time she might see for any crimes committed.

Second is the fact that Attorney General Bill Barr acknowledged that the Obama administration was spying on the Trump campaign in 2016. That’s the first time we’ve heard something like that from a top DOJ official, and I think it reflects a change in the culture at the Department of Justice.

Jeff Sessions, quite frankly, had absolutely no clue about what had gone on with the FBI’s investigation into the Trump campaign. Sessions also didn’t seem to know or care what was going on with the Mueller investigation. I imagine that stems from his decision to recuse himself from any and all matters related to Russia the second he was confirmed as Attorney General. Jeff Session earned the nickname “Sleepy Sessions” for a reason.

Bill Barr’s statements reflect an attitude that seems to be the exact opposite of Sleepy Sessions. Barr’s insightful testimony shows that he knows exactly what’s happened with the Russia investigation. Barr’s assertion that he is going to be investigating the investigators I think reflects a desire to get to the bottom of what exactly led to the massively powerful intelligence apparatus of the United States being turned upon American citizens for political purposes.

The fact that Barr announced his investigation during a Congressional hearing on national television tells me that he’s serious about what he intends to do. The fact that Barr’s accusations of spying sent top Democrats such as Nancy Pelosi, Chuck Schumer, Jerry Nadler, and others into sheer panic mode tells me they think Barr is serious as well.

As I said earlier, I’m not as confident as Sarah Carter’s sources that the perpetrators of this attempted coup will face justice. I am, however, cautiously optimistic. 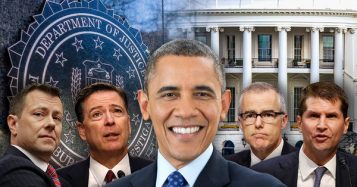