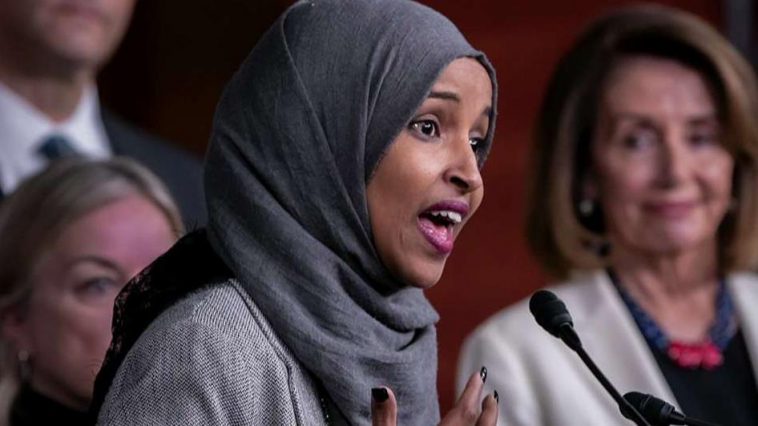 A Jewish rabbi is calling out a Muslim lawmaker — who has been accused of anti-Semitism — and the New York Times for pushing the notion that Jesus was a Palestinian.

Rabbi Abraham Cooper, associate and director of Global Social Action Agenda at the Simon Wiesenthal Center, called out Rep. Ilhan Omar, D-Minn. after she retweeted a tweet from Omar Suleiman, an adjunct professor of Islamic Studies at Southern Methodist University, who said a Palestinian relative asked him why the “Christian right in America largely supports their oppression.”

Suleiman wrote that his relative asked: “Don’t they know Jesus was a Palestinian?”

Rep. Ilhan Omar, D-Minn. is being criticized for retweeting a tweet that claims Jesus was a “Palestinian.” (Twitter: @IlhanMN)

The day before the tweet, a New York Times op-ed claimed: “Jesus, born in Bethlehem, was most likely a Palestinian man with dark skin.”

Cooper accused the NYT of “fake news” and said both are trying to “rewrite” history with the claim.

“Palestine was a name made up by Romans after they crucified thousands, destroyed the Holy Temple in Jerusalem and exiled the People of Israel from their homeland,” Cooper told the Jewish Journal.

Others called out Omar following the retweet.

“No, Jesus was Jewish, actually,” Fred Menachem, a media commentator wrote. “I’m a bit surprised that a Congressperson would retweet false and inaccurate information.”

The account for Students Supporting Israel said: “Is it for real? Jesus was a Jew. What’s next? The Pope is also Palestinian? Stop lowering our IQ.”

The NYT and Omar are not the first to make that claim. Jeremiah Wright, the controversial pastor who preached at a Chicago church attended by President Barack Obama, claimed “Jesus was a Palestinian” years ago at a Nation of Islam event.

Of course he did. Rev. Jeremiah Wright is a “Former” Black Muslim.

As these scriptures show, Jesus Christ was NOT a Palestinian. He was from Nazareth.

So, just what DO Muslims believe about Jesus Christ?

Note first of all the names and titles given Jesus in the Qur’an. Under the personal name “Isa” or “Isa Son of Mary” he is frequently called “Al-Masih” (Messiah) and at one time or another is also referred to as “the Word of God”, “the Word of Truth”, “a Spirit from Him”, “the Messenger of God”, “the Prophet of God”, and “the Servant of God”. He is even said to be “illustrious in this world and the next and of those nearest to God” (3:45). The Qur’an also has a lot to say about Jesus. It relates, for example, the story of the angel’s annunciation to Mary that she would have a son and the story of His virgin birth, and attributes to Jesus a number of miracles (of apocryphal origin). In a word, it says about Him many wonderful things.

But what do these affirmations signify as concerns the person and work of Jesus Christ? Ah, there is the rub! They certainly do not communicate to the Muslim what they would to a Christian, who views Christ in the light of the teaching of the New Testament. For although the Qur’an speaks highly of Christ and presents miraculous aspects of His life as already mentioned, it also categorically denies two of the central teachings of the New Testament–His deity and His crucifixion–and radically misinterprets what they mean.

When the Muslim tries to put all these things together and to express what he understands the Qur’an to be saying about Christ doctrinally, the result is quite different from what the Christian understands the New Testament to be saying. Christ is seen to be a Prophet and Envoy of God of “surpassing greatness” (according to one Muslim writer), but only a man and nothing more. As a performer of exceptional miracles, he was rescued by God from an untimely end, was raised up to heaven, and (according to certain traditions) will come back to earth again–to die a Muslim! He is not the Saviour of the world, and is certainly not God, or “the Son of God”.

Opposing God’s Chosen People and supporting the historically nomadic people that call themselves “Palestinians” fits with Modern Liberals’ Political Ideology, which views modern political struggles as “Class Warfare”, being waged between race and ethnic groups. Liberals believe that the predominantly white West is  somehow subjugating the non-white rest of the world. This viewpoint is an extension of the class-based, rich versus poor, categories, which they intentionally classify people in, following the example of their fallen messiah, Former President Barack Hussein Obama (mm mmm mmmm).

We all know that Rep. Ilhan Omar was elected last November to fill the Congressional Seat of fellow Muslim Keith Ellison, representing the state of Minnesota.

However, you may not know the following shocking information which was shared on October 23, 2018 by pjmedia.com…

Minnesota state Rep. Ilhan Omar (D-60B) currently leads the race to fill the federal House seat being vacated by Rep. Keith Ellison (D-MN). Immediately after being elected to her current seat in 2016, Omar faced allegations — soon backed by a remarkable amount of evidence — that she had married her own brother in 2009, and was still legally his wife. They officially divorced in December 2017.

The motivation for the marriage remains unclear. However, the totality of the evidence points to possible immigration fraud and student loan fraud.

Rep. Omar has stated that she did marry “British citizen” Ahmed Nur Said Elmi in 2009, though the allegation that he is her brother is “absurd and offensive.”

As this implicates Rep. Omar in multiple state and federal felonies, I have contacted the U.S. Attorney’s Office in Minnesota to submit all other information uncovered during our investigation.

However, not only is Representative Omar a Far Left Radical, she is also most definitely a Radical Islamist.

Representative Omar is also supported by and supportive of CAIR – The Council on American-Islamic Relations.

…From its inception, CAIR has sought to portray itself as a moderate, mainstream organization, and as early as 1996 its officials became frequent guests at State Department and White House events. In the aftermath of 9/11, when the Bush administration tried to reassure American Muslims that Islam was not the target of the war on terrorism, CAIR officials were prominent among the invitees. CAIR was the main Islamic group to gain U.S. media access in the post-9/11 period, providing the “Muslim view” of the terrorist attacks and of America’s response to them. As self-acclaimed Muslim spokesmen, CAIR officials typically refused to “simplify the situation” by blaming Osama bin Laden for the attacks on America. Moreover, while they eventually were induced by journalists to condemn Palestinian suicide terror in a pro forma manner, they hedged their disavowals by describing it as an understandable response to Israeli brutality.

Rep. Omar is a Radical Islamic, America-hating anti-Semite who is both biblically and historically ignorant as Jesus of Nazareth, worshipped by millions of Christians around the world as the Son of God, has been proven to be a historic figure.

By insulting the faith of 75% of Americans and constantly siding with our country’s enemies, she has proven on a regular basis since being elected that she is an embarrassment to the House of Representatives.

And, considering the way that her fellow House Democrats are presently behaving, that is saying a lot.

She must be removed from office.