As I’ve noted before, I’d like to see a few younger writers on the site so I took some time to reach out to a few people I thought wrote well and might be interested in having some of their musing published here.

The first interesting thing was that virtually all of the blogs I visited don’t have any easy way for me to contact them. I certainly understand that people with a conservative view might want to write under a pseudonym but what I don’t understand is not having some means for readers to contact them. Even when people posted under their real name, there still wasn’t a means to contact them.

Being good users of social media, everyone had a page on Facebook so I thought I’d contact them that way. Not a single person would respond to me on Facebook.

And then there’s Twitter. I tried a number of ways to see if people would communicate with me.  Since I was the only one replying to their Twitter posts, I thought surely they’d be curious about who was trying to contact them. Again, zip.

There was one blog site that focuses on articles for just one city that did reply with a rather terse “Thanks for reaching out. After looking at your website, neither me or my writers fit what you are looking for.” The thing of it is that I really didn’t describe what I was looking for and how we might help one another. We might have actually been a good fit but we’ll never know.

It seems to me that social media is fostering the notion that communication can be just one way. It’s not. If you’re going to speak, you have some responsibility to listen. Additionally, if someone speaks to you, you have a responsibility to be polite.

Oddly, social media causes the this behavior of “putting it out there” as a be all and end all. The oddest of these are the thousands of people that tweet insults to President Trump as if he or anyone else cares. Social media is the epitome of “if a tree falls in the forest and there’s no one to hear it, does it make a sound?” 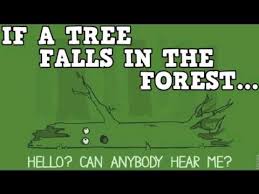 One of the problems is that we live in a world of unwanted communication that we generally refer to as SPAM. We’ve had to develop email SPAM filters to stop the incessant bombard of Nigerian scams and Viagra emails. I’ve noticed that people have extended this notion to communicating with other actual human beings. If you rank someone as SPAM, you simply delete that person from your life. There’s no reason to respond; just ignore the person. They’re just SPAM.

We used to call that “rude behavior.”

It also seems to me that people horrible-ize any attempt at communication by immediately reacting as if there must always be some negative and sinister meaning behind someone trying to start a conversation. The risk, therefore, is lower to simply ignore the communication attempt. After all, who would try to communicate with someone unless they just wanted something?

In the end, I find communication becoming shallower and shallower. We only need look at how the Democrats are refusing to have any meaningful dialogue with President Trump. It doesn’t get any shallower than that!