I want this to be true, but I have my doubts, frankly. Maduro still seems to be in firm control of the country:

Venezuelan troops have begun disobeying orders from Nicolas Maduro’s top officers and are unlikely to heed calls to crack down on a humanitarian-aid caravan scheduled to enter the country this weekend, U.S. Senator Marco Rubio said.

“Saturday’s a day when we’re going to find a lot about the Maduro regime,” Rubio, who’s been helping set U.S. policy toward Venezuela, said in a telephone interview on Wednesday. “I have reason to believe that rank-and-file military are not going to violently suppress aid workers.”

Juan Guaido, the National Assembly leader battling Maduro as legitimate head of the country, has been pushing aggressively for soldiers and generals alike to recognize him as president, something the U.S. and more than 30 other countries have done. While only one general and two colonels — among thousands of top officers — have broken ranks in the past weeks, Rubio says Maduro’s grip is loosening.

“There’s already significant resistance” among the troops, he said, adding that high-ranking personnel have doubts about “whether the people under their command are going to do what they’re asking them to do.”

Following Guaido’s lead, thousands of volunteers have organized to escort relief caravans expected to enter Venezuela from Colombia on Feb. 23, carrying food and medicine that’s been piling up on the border for days. Maduro has ordered his security forces to barricade the entry points, contending the shipments are meant to humiliate and undermine him and serve as a pretext by President Donald Trump to invade his country. 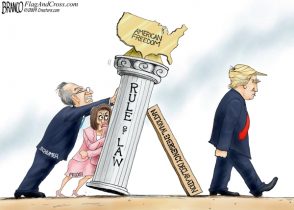