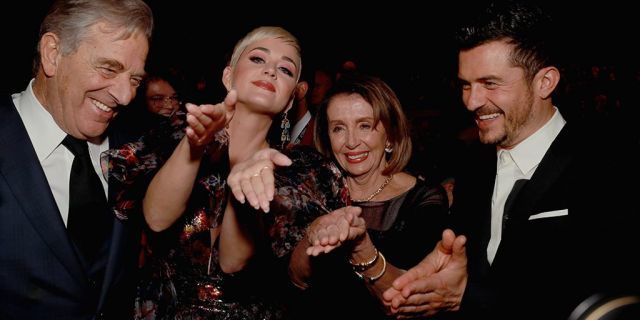 Yeah, they can all clap like seals. But, can they all balance a ball on their nose, also?

After defending her ‘sarcastic clap’ directed at President Donald Trump during Tuesday’s State of the Union speech, Speaker of the House Nancy Pelosi, D-Ca., assured the public it was, in fact, sincere applause.

“It wasn’t sarcastic,” she said to reporters on Wednesday.

She added: “I wanted him to know that was a very welcome message.”

However, it looked anything but sincere as she recreated the moment with Hollywood actor Orlando Bloom and singer Katy Perry.

The Speaker was attending the MusiCares Person of the Year gala in Los Angeles Friday. The event honored country music icon Dolly Parton.

She was caught by cameras laughing and recreating the moment with the entertainers as her husband looked on.

Pelosi’s daughter contradicted her mother’s claim that Tuesday’s initial clap was not sarcastic and harkened back to her childhood.

“Oh yes that clap took me back to the teen years. She knows. And she knows that you know. And frankly she’s disappointed that you thought this would work. But here’s a clap,” Christine Pelosi tweeted.

I was going to say “words fail me”.

I receive President Trump’s tweets on my phone as soon as he sends them.

however, when I look at them, there always are hundred of Liberals Trolls already on the thread, hurling vile insulting tweets at the president through means of gifs, memes, and expletive-filled, poorly-spelled missives designed to pacify the internal angst and temper tantrum of the individual sending them.

I always wonder how these internet trolls, paid and unpaid, can post such horrible, disrespectful garbage aimed at the president of our mutual country.

I always figured it was lack of home training.

However, after watching the actions of San Fran Nan Pelosi and the rest of the Far Left Democratic Party, including the “useful idiots” in Hollywood and the rest of the Entertainment Industry, I realize that we are witnessing what I have described as the rise of the “New Bolsheviks”.

The Democratic Hierarchy are ideologues dedicated to “radically changing” our Constitutional Republic into “just another country” governed through “Democratic Socialism”.

The Democrats have to be the most arrogant and stupid political party in history to believe that attacking a sitting president who has accomplished so much for the American people in so short a time will win them the approval of the average Americans between the two coasts who put him in office in the first place.

They do not seem to comprehend that it was their overestimation of their popularity which cost them the 2016 Presidential Election in the first place. Their anti-American policies and blatant political corruption, administrated with joyful glee for 8 long years by Barack Hussein Obama did nothing for Democrats except lose them the presidency by producing a visceral hatred of them by those Americans whom they continue to insult on a daily basis.

The Democrats have not been the party of the “working man” for decades. In fact, since the Far Left have taken over the party, they have become nothing but a conglomeration of special interest groups, drawn together by their desire to “radically change” America into a nation governed by adherents to the failed theories of Karl Marx, as I mentioned earlier.

The Democratic Party has done nothing since November of 2016 to attempt to calm down their minions such as the black-robed cowards of Antifa, or the “New Bolsheviks who tried to storm Capitol Hill during the Kavanaugh Hearings, no matter how their individual candidates promised to “get along” with Republicans during the Midterm Campaign.

They certainly were not “getting along” with Acting Attorney General Whitaker the other day when he came to answer their questions, were they?

What the Democrats need to remember is that for every action there is an equal and opposite reaction.

In the case of their continued attacks on and planned investigations against President Trump, they need to remember that they live in a humongous glass house.

And, it is very hard to deliver a sarcastic “golf clap” in wrist and ankle shackles in an orange jumpsuit.