In the clearest evidence yet that much of the Russia investigation has been orchestrated primarily by government officials who are looking for any pretext they can find to remove him from office, CBS News revealed former FBI Deputy Director McCabe said that the DoJ seriously discussed finding ways of removing Trump from office in what appears to be a retaliation for the firing of James Comey:

Former acting FBI Director Andrew McCabe in a new interview reveals fresh details of the investigations into President Trump, telling CBS that there were conversations about the possibility of removing Trump under the 25th Amendment and confirming that Deputy Attorney General Rod Rosenstein had offered to wear a wire around the president.

McCabe spoke to “60 Minutes” for an interview ahead of the release of his book, “The Threat: How the FBI Protects America in the Age of Terror and Trump.”

CBS News’s Scott Pelley appeared on “CBS This Morning” Thursday to discuss his interview with McCabe, saying that McCabe told him about the efforts to figure out “what to do” with Trump during the eight days between the firing of then-FBI Director James Comey and the appointment of special counsel Robert Mueller.

“There were meetings at the Justice Department at which it was discussed whether the vice president and a majority of the Cabinet could be brought together to remove the president of the United States under the 25th Amendment,” Pelley said Thursday. “And the highest levels of American law enforcement were trying to figure out what to do with the president.”

Pelley says that McCabe said that Rosenstein’s offer was serious and it happened more than once.

“McCabe … says no, it came up more than once and it was so serious that he took it to the lawyers at the FBI to discuss it,” Pelley said.

The fact that the Trump administration and the Republican Congress are allowing this gross miscarriage of justice to roll on and on and ruin innocent peoples’ lives is a travesty.

Larry Schweikart has been arguing on Twitter that Trump’s call not to go after these people was the right one (you should read the whole thread, but this tweet sums up his argument):

The reason I said this was that it would have consumed every single bit of Trump's energy, attention, and political capital (which was not great at the time) to jail just ONE.

The problem is that Trump’s agenda is being crippled because he is surrounded by enemies who are doing everything they can to remove him from office and jail him, his friends, his family, and anyone who worked on his campaign and helped him win.

Ultimately, Trump made a tactical error in believing these people would settle down when he was elected, and would come to the negotiating table and start working out deals. They haven’t, and they won’t.

We are dealing with religious fanatics who genuinely believe they have the mandate of heaven to rule the country like kings, and they are never going to come to terms with people they regard as dirty and unclean moral and intellectual inferiors. It would really help if Trump understood this and acted accordingly, even if it meant putting his agenda on hold so he could clean out the government. 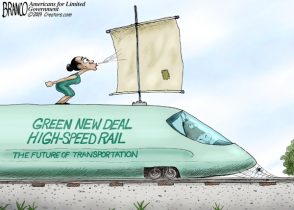