Democrat Minnesota Representative Ilhan Omar has found herself embroiled in controversy after having tweeted out a few anti-Semitic sentiments over the last few days. Democrats and Republicans both condemned Omar’s statements, and she was eventually forced to issue the traditional non-apology apology favored by Leftists everywhere.

Representative Omar did have her defenders, however. CAIR leaped to her side to call her odious statements “legitimate criticisms of Israel.”

Now, it seems, Ilhan Omar has found another defender. The former 5th Grand Wizard of the Ku Klux Klan, David Duke, has come out swinging against Omar’s detractors.

So, let us get this straight. It is “Anti-Semitism” to point out that the most powerful political moneybags in American politics are Zionists who put another nation’s interest (israel’s) over that of America ?????? https://t.co/2e1QbIxOGp

You might recall David Duke came out in support of President Trump during the 2016 campaign. President Trump was constantly forced by the Mainstream Media and the Left to disavow David Duke. Despite President Trump unequivocally saying that he did not welcome David Duke and found him to be a horrendous human being, the Media still talked as if the two texted daily.

Will that same Mainstream Media force Ilhan Omar to disavow David Duke’s support? Will she find herself accosted by screaming supporters that demand to know whether or not she stands with David Duke at every press event?

Somehow, I highly doubt it. 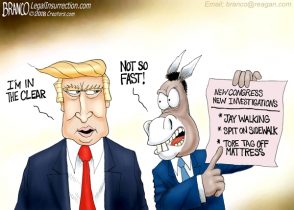