Verizon Media Group is the new name of what was once Oath, the conglomeration of AOL and Yahoo created by Verizon, after Verizon bought them in 2015 and 2017 respectively. The deal was engineered at least in part by AOL CEO Tim Armstrong, who believed that with Verizon’s backing, he could transform AOL’s digital ad platform into something capable of challenging Google’s dominance in the online advertising market.

Armstrong was unable make his plans a reality, however, and Verizon appointed Hans Vestberg as their CEO in August 2018. Vestberg had much less interest than the previous CEO Lowell McAdam in trying to become an advertising giant, and as a consequence has been paring back the company’s investment in Verizon Media Group. The writing was on the wall when Verizon booted Tim Armstrong from Verizon Media Group in September.

That led to Verizon laying off 800 employees in Verizon Media Group yesterday, or 7% of the unit’s total workforce:

Verizon Communications Inc.’s beleaguered media group is laying off 7% of its staff and is focusing on fewer areas to revive its fortunes, according to people familiar with the matter.

Mr. Gowrappan said in an email to staff Wednesday that the business would focus on mobile and video-focused products. Yahoo-branded entertainment and news platforms are particularly important to the unit’s strategy, the people said.

Other priorities include creating more video content for its own media properties such as Yahoo Finance and those run by third parties like Roku, as well as generating more revenue from its ad platforms and a streaming video and content delivery system. That system, called Verizon Digital Media Services, works with companies like Hulu, ESPN and Walt Disney Co.

Despite its ambitions of becoming an advertising giant, the unit has failed to meet revenue targets by selling digital ads. The carrier said in December that it is booking a $4.5 billion accounting charge related to the business and executives acknowledged that core parts of the business—search and desktop usage—were under pressure.

Of particular interest to conservatives will be the news that some of these people were Huffington Post staffers:

HuffPost employees started receiving calendar invitations to meet with human resources in the morning, according to HuffPost reporter Andy Campbell. Among the areas impacted was the opinion editorial team, which was eliminated, Deputy Opinion Editor Chloe Angyal reported.

According to Politico media reporter Michael Calderone, the number of unionized employees axed from the media company stands at 15 with more cuts scheduled to be announced. 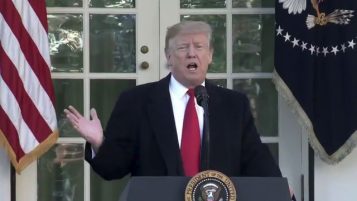