For those who refuse to compromise in the name of in the name of border security, I would ask, imagine if it was your child, your husband or your wife whose life was so cruelly shattered and totally broken. To every member of Congress, pass a bill that ends this crisis. To every citizen, call Congress and tell them to finally, after all of these decades, secure our border. This is a choice between right and wrong, justice and injustice. This is about whether we fulfill our sacred duty to the American citizens we serve. When I took the oath of office, I swore to protect our country. And that is what I will always do so help me God.- President Donald J. Trump, Address to the Nation, 1/8/19

Last night, the 45th President of the United States of America delivered an address to the nation concerning the National Security and Humanitarian Crisis on our Southern Border.

During his presentation, President Trump was factual, focused, passionate, and presidential as he masterfully laid out the case for securing our border, including provided the reasoning for the $5.6 billion which he is asking for in order to erect a steel barrier to help end the drug trafficking, human trafficking, and breaking and entering of our Sovereign Nation by illegal aliens, some of whom possess criminal records as evidenced by the 266,000 whom ICE Agents have arrested. Others have come into our country and murdered 4,000 of our citizens, committing 100,000 assaults and 30,000 sex crimes.

He also pointed out that, in the past, Democrats have supported building a wall on the Southern Border.

WASHINGTON, Sept. 29 — The Senate on Friday approved the building of 700 miles of fence along the nation’s southwestern border, fulfilling a demand by conservative Republicans to take steps to slow the flow of illegal immigrants before exploring broader changes to immigration law.

The Senate vote, 80 to 19, came as lawmakers finished a batch of legislation before heading home to campaign.

The Senate on Thursday passed the most monumental overhaul of U.S. immigration laws in a generation, which would clear the way for millions of undocumented residents to have a chance at citizenship, attract workers from all over the world and devote unprecedented resources for security along the U.S.-Mexico border.

The vote was 68-32. Fourteen Republicans crossed the aisle to vote with all Democrats in favor. Thursday’s vote now puts the onus of immigration reform on the Republican-led House, where leaders have been resistant to the Senate legislation.

Schumer was wrong. The bill did not make it through the House of Representatives.

After the president spoke last night, House Speaker Nancy Pelosi and Chuck Schumer responded in what came off as desperate, immature, and out-of-touch attempt at a rebuttal on behalf of the Far Left Democratic Party.

Quite Frankly, they sounded more concerned about the inconvenience which delayed paychecks were causing 800,00 Government Workers than they were about the safety of American Citizens, calling all of the violence and human suffering caused by an unsecured Southern Border a “manufactured crisis”, accusing President Trump of “misinformation” and “malice”.

The two Democratic Leaders, giving the appearance of a couple of stereotypical clueless bureaucrats on auto pilot, insisted that the president end the shutdown first and then “we can work to resolve our differences over border security”.

Isn’t that the same sort of line that the Democrats handed President Reagan when they got him to bestow amnesty on thousands of illegal aliens back in the day?

“I will gladly pay you Tuesday for a hamburger today” – Wimpy

Last night’s Democratic Rebuttal was the biggest exercise in hypocrisy since Obama used the horrible mass murder in Sandy Hook to call for gun control, using children as stage props.

As the president so eloquently put it last night,

Some have suggested a barrier is immoral. Then why do wealthy politicians build walls, fences and gates around their homes? They don’t build walls because they hate the people on the outside, but because they love the people on the inside. The only thing that is immoral is for the politicians to do nothing and continue to allow more innocent people to be so horribly victimized. 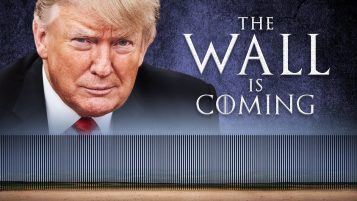