Despite assurances from the Media and the Left that she is hearty and hale, Supreme Court Justice Ruth Bader Ginsburg has not shown up to work this week. Instead, Ginsburg has been recovering from three broken ribs she received from a fall in November, plus lung cancer surgery in December. We have been told that Ginsburg is “working from home,” and is most definitely of sound mind and body so no one needs to worry.

Ginsburg’s imminent exit from the hallowed halls of the Supreme Court seems all the more likely. Conservative journalist Jacob Wohl dropped this little bomb on Twitter just a few minutes ago.

I should note at this point that I have not been able to find any corroboration as to what Ruth Bader Ginsburg’s plans are. The White House, however, seems to be preparing for Ginsburg’s imminent demise. Departure. Whatever.

Politico reported that the Trump Administration has been quietly discussing a possible replacement for Ginsburg ever since she missed her first day of work in 25 years on Monday:

The White House “is taking the temperature on possible short-list candidates, reaching out to key stakeholders, and just making sure that people are informed on the process,” said a source familiar with those conversations, who spoke on background given the delicate nature of the subject. “They’re doing it very quietly, of course, because the idea is not to be opportunistic, but just to be prepared so we aren’t caught flat-footed.”

The reality is that Ruth Bader Ginsburg is an 85-year-old woman who is recovering from broken bones and major surgery. Medical fact and my own anecdotal evidence has shown that 85-year-old women tend not to recover from a one-two punch like that.

We all wish Ruth Bader Ginsburg the best, but at this point the country-and Ginsburg herself-would be better served by her resignation.

Thank you for your decades of service, Ruth. It’s time to hang up your robe and enjoy your retirement. 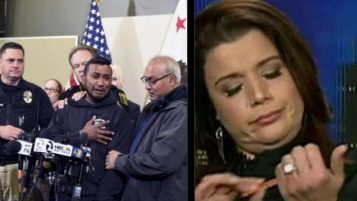