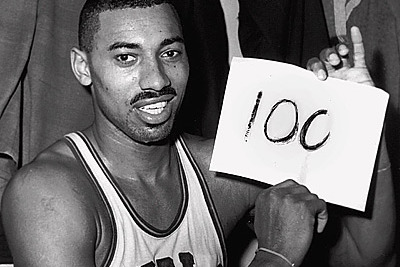 It’s always a stretch to use a generationally-specific metaphor when making a joke or snide remark (in this case both) because you leave yourself open to having to explain and, as Mick Jagger famously said: “Never apologize and never explain.”

OK, well, His Satanic Majesty may not have said that but he cudda – so there’s that.

Anyway, for those Not In the Know, NBA Hall of Fame hoopster Wilt Chamberlain was the LeBron James of his era (1960’s & early 1970’s).

Wilt the Stilt stood a towering 7′ 1″ inches tall back at a time when the most statuesque of pro cage centers rarely topped 6′ 10″.

Wilt’s second most famous lifetime accomplishment was to once score exactly 100 points in a single game (you can look it up) – a record that still stands tall today.

Geez, The Gentle Reader thinks, if scoring 100 points in a game was Wilt’s Number Two lifetime accomplishment what perchance would be Number One?

Glad you asked, because the answer is where Wilt the Stilt and Senator (and failed Presidential candidate) Mitt Romney intersect.

You see Wilt was also a Prolific Scorer in the bedroom (and bathroom and the shower stall and the back seat of cars and hall closets – you get the picture) whereby when the Dapper Dunker toddled off to His Final Rest (which he musta needed) he claimed to have boffed better than 20,000 women in his primary career as a Swordsman.

If you are SABRmetriclly inclined you can also look that up.

Which is the Long Road to the #NeverTrump antics of the pathetic and semi-irrelevant Mitt Romney, who predictably and haplessly dissed The Donald in a WaPo editorial on New Year’s Day thereby making himself (as predicted) The New John McCain and also giving him a new, well deserved identity and moniker:

The Girl that Wilt Chamberlain turned down.