If you can believe CNN (NOTE), the midterm turnout was gigantic. Who didn’t predict this? Well me, for one when I said:

Every midterm we talk about how important they are and how energized we are or aren’t. The reality is that turnout for the midterms is 35%-ish with just a couple points separating the two parties. 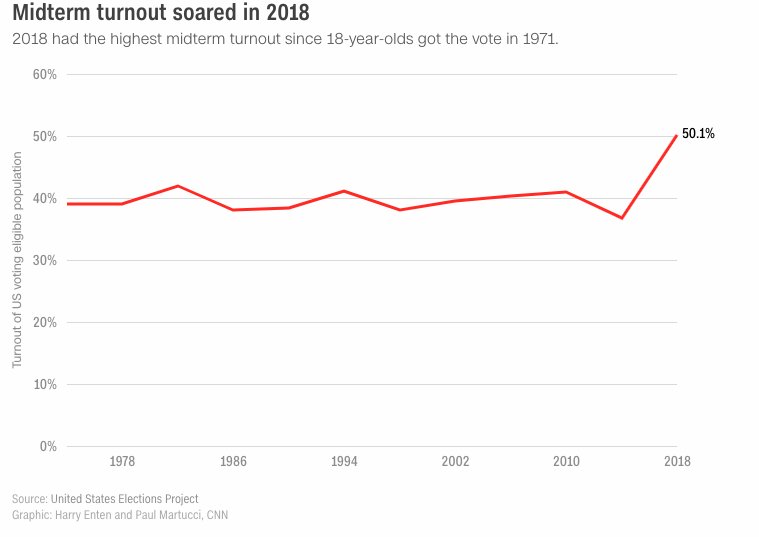 I’m still a little surprised but I suppose the reality is that a lot of people were motivated to “deliver a message to Donald Trump” either pro or con.

The 50.1% turnout is higher than for any midterm in the last 100 years. This despite the fact that many of those elections took place when those under 21 were not eligible to vote. Remember, those younger than 21 are the least likely to vote, so you’d expect that the the turnout rate of eligible voters would have been higher before the youngest were eligible (in years such as 2018).

We really don’t know yet the breakdown is between the various parties and independents. Another important factor will be geography.

Barring any other revelations, I think we’ll have to concede what is probably obvious at this point — the Democrats went all in and “Trump Derangement Syndrome” had its intended result at the ballot box.

President Trump did, in my view, everything humanly possibly to rally as many of the troops as he could and maintaining the Senate was certainly a gigantic win. Certainly he’s solved any problem that existed with “voter apathy.”

The only good news is that the Republican Party can once again return to what it does best — fund raise as the underdog. They sure didn’t know how to do it as the winners.