We’ve talked frequently about President Trump’s ability to play 3D chess while everyone else is playing 2D chess. What we mean is that the President seems to have the ability to see a much broader array of options along with the ability to be thinking several moves ahead.

With the impending shutdown, the Democrats believe they have President Trump checkmated. Any move he makes will still have the same result which is he won’t get the $5B he wants for border security. Checkmate.

The strategy of the Democrats is clear and obvious — continue to describe any vote in the Senate as “impossible” until the new Congress meets and then a united Democrat majority can fully implement #RESIST to everything. The strategy of the Republicans seems to be, as usual, “we don’t have one.” Or in this instance, “we could win if we wanted but it wouldn’t be the nice thing to do.” Or, perhaps, “Wall? What wall?”

What will the president do?

As Capitol Hill, Washington and most foreign leaders have come to accept, the only person capable of predicting the president’s behavior is, well, the president. (And that in itself gets murky.)

Sheesh. They always need to throw in the snark. Oh, well.

If there is a shutdown, which appears certain at this point, who will flinch first? For the current Senate, the ball is clearly in Senate Majority Leader Mitch McConnell’s court. McConnell has said that the “nuclear option” can’t be accomplished because there aren’t enough votes to suspend the 60 vote requirement to end a filibuster. Personally, I’d like to see Mitch at least give it the old college try. What is there to lose? I’m pretty damn sure the Democrats won’t have have any difficulty “going nuclear” or using any other parliamentary dodge to get what they want when they’re in the majority!

Of course, one of the things that’s so sad here is that Democrats had introduced various pieces of legislation over the years on border security:

In 2006, 26 Democrats voted for a bill that directed the building and maintenance of 700 miles of border fencing. Among those Democrats who supported the bill were Schumer, Sen. Dianne Feinstein of California and then-Sen. Barack Obama of Illinois.

In 2013, all 54 Democrats voted to pass legislation to build a physical barrier on the border at a much greater cost than the $5 billion President Trump is now requesting. The bill provided $46 billion for border security improvements and added 700 miles of border fencing. Schumer and Feinstein were again among the Democrats who voted for it.

In terms of negotiation, there’s this really odd, from my view, attempt to change the language so that President Trump isn’t building a “wall” so much as a thick fence. What blows my mind is that the design of the wall was finished some months ago and was well publicized. There was all this news about how members of the military tested various versions. 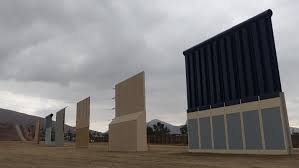 You’d think this never happened. And the President tweeted this the other day:

A design of our Steel Slat Barrier which is totally effective while at the same time beautiful! pic.twitter.com/sGltXh0cu9

Maybe the whole “oh, you didn’t tell us you were going to build a fence!” will be the way out of this for all sides. It boggles my mind whenever this kind of stuff happens. I once worked for a company that changed the sheet metal on the outside of a product. The product itself was identical — it just looked different. We introduced it as something entirely new and even when offered the “old” product at a discount, customers would pay the higher price for the “new” product even though there was exactly zero difference between them.

As far as a slat barrier goes, there was a lot of discussion about this back in March when the Border Patrol had expressed a significant desire for this design so that it could be easily patrolled. This made a lot of sense to me since you need to watch what’s going on on the other side which means you’d like to see through it in a moving vehicle.

Is this a “wall.” Of course it is. Is it a “fence.” Of course it is. And if we all have to go wink-wink-nod-nod to stop the illegal aliens from coming across our border, then we can all call it the Stay Puft Marshmallow Man for all I care!