Well this is one of those slap your forehead “of course – how did I miss that” metaphor moments of someone stating The Obvious that most of The Assembled Punditry (yours truly included) absolutely missed.

In her post Trump the Knuckleballer the blogger Neo correctly likens Trump’s political style to that of a consummate knuckleball pitcher: someone who hurls what seem to be floating tatter-bait towards the plate only to have batter after batter helplessly flail again and again  – one ugly strikeout after another:

Trump (is a) knuckleballer. The knuckleball pitcher confounds batters with the zaniness of the ball’s behavior once it leaves his hand. It doesn’t require extreme force but it’s not an easy pitch to throw and it’s a very difficult one to control. But it can make ordinarily good hitters look bad; they often just can’t figure out what’s going on, and they end up looking silly when they swing at a knuckler.

As a baseball affectionado prone to using the sport as metaphor regularly Neo’s brilliant metapher plunked my noggin like a 97 mph bell-ringer:

“How did that never occur to me?”

But Neo is absolutely spot on.

And here all this time I thought the chants of “Get Out the Broom!” were referring to Hillary… 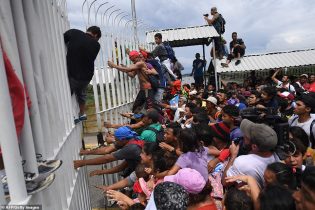