What goes around, comes around…

Multiple sources have confirmed to DailyMail.com that Megyn Kelly is out at NBC.

This move comes just 48 hours after the embattled host made remarks in which she defended blackface on Today.

Kelly tried to deal with the scandal by delivering a tearful apology on-air and welcoming two black panelists to discuss the fraught and horrifying history of the practice, but it did no good.

‘Megyn Kelly is done. She is not ever coming back,’ said an NBC executive with knowledge of the situation.

‘We are just working out timing of the announcement but mark my word – she is gone and will never be seen on NBC live again.’

The source then added: ‘Here’s the worst part – her deal is a non-break deal – so she walks away with all that money. It’s disgusting and heads should roll here because of it.’

A spokesperson for NBC declined to comment at this time.

The only thing remaining is for Kelly’s lawyers to meet with NBC executives to finalize an exit package.

Page Six is reporting that Kelly is now asking that Ronan Farrow be present for that meeting, in a move that likely relates to the former NBC correspondent’s claims that the network killed his Harvey Weinstein expose.

Kelly had previously called on NBC to investigate why the story was shelved, which is why Farrow took his expose to The New Yorker.

During the 2016 Presidential Campaign, Newt Gingrich cut straight to the heart of the situation regarding Ms. Kelly’s attitude toward  Republican Candidate Donald J. Trump as Breitbart.com reported at the time…

NEWT GINGRICH: Let me point out something to you: The three major networks spent 23 minutes attacking Donald Trump that night, and 57 seconds on Hillary Clinton’s secret speeches. You don’t think that is a scale of bias worthy of Pravda?

MEGYN KELLY: If Trump is a sexual predator, that is–

GINGRICH: He’s not a sexual predator. You can’t say that. You could not defend that statement.

KELLY: I have not taken a position on it.

GINGRICH: I’m sick and tired of people like you using inflammatory language that is not true.

KELLY: Excuse me, Mr. Speaker, you have no idea whether it is true or not. What we know–

GINGRICH: Neither do you.

KELLY: I’m not taking a position on it.

GINGRICH: Yes you are. When you used the words, you took a position. It is very unfair of you to do that, Megyn.

GINGRICH: That is exactly the bias people are upset by.

KELLY: I think that your defensiveness on this speaks volumes, sir.

GINGRICH: Let me suggest to you —

KELLY: No let me make my point. What I said if if Trump is a sexual predator, than it is a big story. And what we saw on that tape was Trump himself saying he liked to grab women by the genitals, and kiss them against their will. Then we saw 10 women come forward after he denied it at a debate … He denies it all, which is his right. We don’t know what the truth is. My point to you is, as a media story, we don’t get to say the 10 women are liars. We have to cover that story.

GINGRICH: Sure, so it took 23 minutes for the networks to cover that story. And Hillary Clinton had a secret speech in Brazil to a bank that pays her $225,000 saying that her dream is an open border where 600 million people could come to America, that is not worth covering?

Do you want me to go back to the tapes of your show recently? You are fascinated with sex and you don’t care about public policy.

GINGRICH: That’s what I get out of watching you tonight.

KELLY: You know what, Mr. Speaker? I’m not fascinated by sex, but I am fascinated by the protection of women and understanding what we’re getting in the Oval Office.

GINGRICH: And therefore, we’re going to send Bill Clinton back to the East Wing, because you are worried about a sexual predator. Do you want to comment on whether the Clinton ticket has a relationship to a sexual predator?

KELLY: We on ‘The Kelly File’ have covered that story as well, sir.

KELLY: Mr. Speaker, we have covered that. We on “The Kelly File” have covered the Bill Clinton story as well. We’ve hosted Kathleen Willey. But he is not on the ticket.

Kelly ended the segment by telling Gingrich he needed to take his “anger issues” and “spend some time working on them.”

And, with that interview, Pot met kettle.

Megyn Kelly is a perfect example of the old proverb which admonishes us not to shoot ourselves in our own foot.

After becoming Fox News’ “Next Big Thing” and rising to the top of the Cable TV Ratings ,after being given Sean Hannity’s 8 p.m. Central time slot, Ms. Kelly started to read her own press clippings and grew to believe that she was the most important story out there and NOT the news which she was supposed to be reporting.

During the Presidential Campaign, her vitriol aimed at the Republican Candidate turned off those who had helped her to rise to prominence. Quite frankly, if they had wanted to listen to incessant attacks against Mr. Trump, they could have turned over to the Main Stream Media.

With the Political Ascension of Donald J. Trump, she chose to eschew the “Fair and Balanced” Reporting that vaulted Fox to the top of the Cable News Ratings, instead, during the Presidential Campaign, opting to join the baying “newshounds” of the Main Stream Media in their quest to bring down the Republican Candidate by any means necessary.

Unfortunately for Ms. Kelly, her strategy backfired on her miserably, costing her rating points and allowing Sean Hannity to take over the lead among Fox News’ Evening Programs. and making her look like a fool when Trump won the Presidency.

Then, her book was so awful, that Amazon.com had a hard time keeping up with their dutiful erasure of all of the one-star ratings that Ms. Kelly received.

Just like the Internet Trolls, who invade Facebook Political Pages and Political Websites, in order to disrupt conversation and call attention to themselves, the MSM, including Ms. Kelly as well, through the creation of their own facts, permanently damaged their own credibility, quite probably beyond all repair.

So, Ms. Kelly moved on to NBC, where she joined the rest of her Main Stream Media Colleagues.

After signing a “yuge” multi-million dollar contract, Ms. Kelly thought that she had it made and was finally free to be the “Broadcast Journalist” that she longed to be, unfettered by any pressure to be “fair and balanced”.

And then, she found out that, in the business world of the Liberal Main Stream Media, “Broadcast Journalism” left the building with Walter Cronkite and David Brinkley, being replaced long ago by “Political Correctness”.

So now, Ms. Kelly finds herself with no place to go.

She has ticked off both Fox News and the Main Stream Media, becoming an albatross around the neck of any news organization that would choose to hire her, because to put it quite simply, once you torque off the American Public, you never get them back. 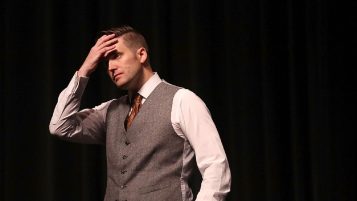