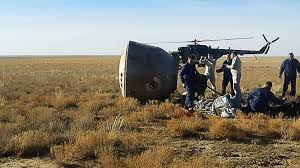 Sometimes it’s fun to go full tabloid in the subject line particularly when there’s a good end result. In case you missed it because the media was fixated on some perceived indiscretion by our president, there was a manned rocket failure in Russia last week which could have easily had a very bad outcome.

By the way, a Google search for “Trump Robert E. Lee” returns  60,900,000 results for a totally fake news story and “Russian booster failure”  68,300 results for an actual news story that has wide implications.

Details are a bit sketchy still but here’s what we know so far. The Expedition 57 launch from the Baikonur Cosmodrome in Kazakhstan was to carry NASA astronaut Nick Hague and Russian cosmonaut Alexey Ovchinin to the International Space Station. Failure of the booster occurred shortly after separation of the first and second stages. There was damage to the second stage which caused a massive vibration. The on board computer shut down the second stage followed by separation of the Soyuz capsule. The capsule deployed its parachutes and landed safely. The two astronauts were rescued in short order and suffered no injuries.

At the moment, that’s pretty much all we know. I’ve also done some additional research indicating that at present Trump hasn’t been implicated in the failure. Russia has launched a criminal investigation so I suppose there’s some chance this will be rolled in Mueller’s ongoing investigation.

Currently, all Soyuz flights have been suspended.

There are enough supplies on the ISS that provide for the [adequate] living conditions. We are estimating that the supplies will last [the crew] six months — until next summer or even longer. The supplies include the stocks of fuel, oxygen, water, food,

Solovyov also indicated that they understand what went wrong.

So we’ll see. This could either be a tiny blip in the history of space travel or it could have much broader implications should the problem that caused the failure be difficult to fix.