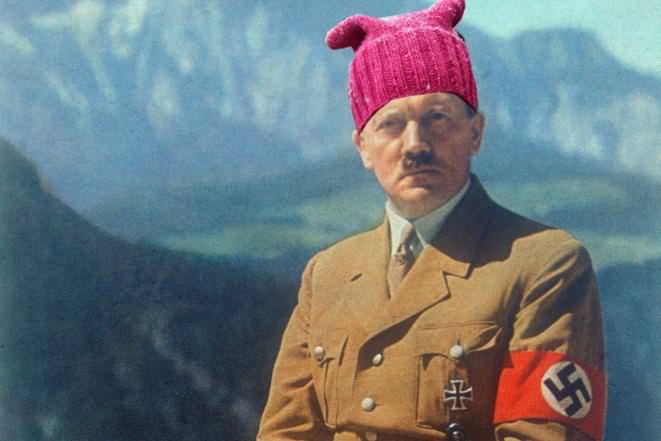 It recently occurred to me that with the ascendance of The Orange Hitler to the White House in January 2017 I am now on My Sixth Hitler.

That might seem like a lotta Hitlers, but as a Baby-Boomer born in the early 1950’s I missed out on the Original Hitler and have had to settle for all the Other Hitlers that have occupied The Oval Office since 1968.

Given that the Collective Generational Memory of Xers only goes back to the mid-seventies and the Millennial’s to the mid -nineties I feel it  is my Historical Duty to chronicle All The Hitlers who have come along since 1945.

Interestingly, all the American Hitlers who have pounded their iron fists on the Resolute Desk and stomped their shiny jackboots on the neck of the country have belonged to The American Party of Hitler: the GOP.

In fact only one Republican president since the end of WWII (The Big One) wasn’t a Hitler: Dwight Eisenhower – a guy who had a small role in disposing of The Original Hitler and for whom the comparison to Ol’ Dolph might have been a tad too distasteful even for the Adlai Stevenson Democrats of the day.

Certainly Hitler v1.0 – The Tricky Dickster – was until recently The Gold Standard of American Hitlers.  And being the first American Hitler to resign the presidency in disgrace only cemented Nixon’s Hitlerian standing.

Jerry Ford, the bumbling, even kinda lovable loser Hitler, was the next in line to wear Der Fuehrer’s mantle.

Hitler v3.0 was originally The California Hitler by virtue of his time as that state’s governor, so it weren’t much of a stretch for Senile Smilin’ Ronnie to play the part of Hitler for his two terms in his Washingtonian Reichstag.

Reagan had the Good Sense to have Bushitler v1.0 as his vice-fuehrer, although Bush the Elder only tricked the electorate into allowing him one term for his Fourth Reich.

But only eight short years later it would be Bushitler v2.0,  ChimpyMcBushhitlerJr., who would take the country down the primrose path of unbridled Nazism with his genocidal War for Oil based on lies, lies and more lies.

Fortunately Bushitler the Younger had an incompetent Himmler in Karl Rove, a media genius who keep counselling His Swastika’d Master to stay above the fray when the Left kept pointing out his fascistic foibles.

Which brings us to the present day Sixth Reich of The Penultimate Hitler – the Orange One, the guy who turned the knob on the Hitler-o-Meter up to 11, – Donald Trump.

Never in my lifetime under all the preceding Hitler’s have I seen such a unified front of opposition as there is to our current Pussy Grabbing Hitler.

Thank God for The #Resistance!

If not for these heroic freedom fighters – this brave cadre of activists who have experienced dangers and hardships not seen since the original French version circa 1943 – the cattle cars would now certainly be pulling up to yuge barb-wire fenced camps to disgorge their rainbow-clad human cargo.

And you though stuffing Babies into Cages was bad!

Anyway, there you have it: a brief overview of How We Got To Where We Are Today, complete with a historical Hitler scorecard.

Kinda makes you wonder who The Lucky 7th Hitler will be, don’t it?