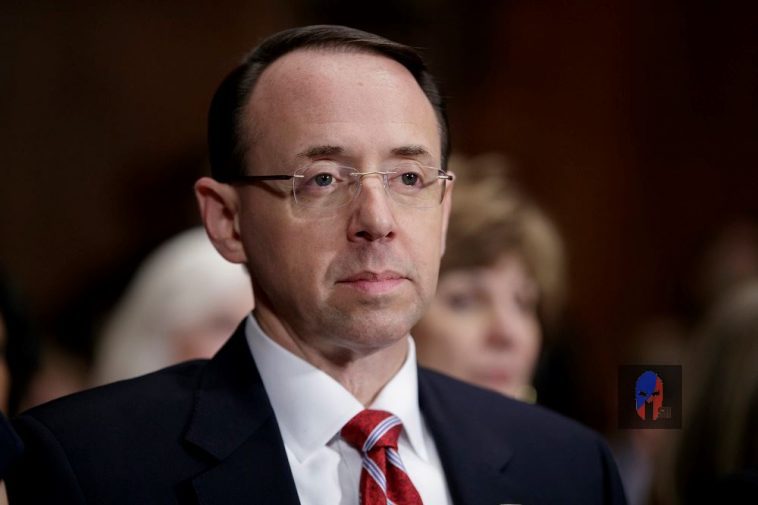 The impeachment articles accuse Rosenstein of intentionally withholding documents and information from Congress, failure to comply with congressional subpoenas and abuse of the Foreign Intelligence Surveillance Act (FISA).

It was not immediately clear whether the House of Representatives would consider the resolution before lawmakers begin the August recess Thursday afternoon. The House will reconvene Sept. 4.

The resolution states it will be “referred to the Committee,” meaning the Judiciary Committee, for further review. That language suggests the full House will not immediately consider the articles of impeachment.

The articles were introduced by Reps. Mark Meadows of North Carolina and Jim Jordan of Ohio, the chairman and a prominent member of the conservative House Freedom Caucus.

In one article of impeachment, Rosenstein is accused of improperly signing off on the FISA surveillance warrant application against ex-Trump aide Carter Page.

…The application heavily relied on the infamous Steele Dossier, which was funded by the Clinton campaign and the DNC and contained unverified, salacious allegations against Trump.

“Under Mr. Rosenstein’s supervision, the Department of Justice and FBI intentionally obfuscated the fact the dossier was originally a political opposition research document before the FISC [Foreign Intelligence Surveillance Court],” the articles of impeachment state.

They continue: “As Deputy Attorney General, Mr. Rosenstein has failed in his responsibility for the proper authorization of searches under FISA, and his conduct related to the surveillance of American citizens working on the Trump campaign has permanently undermined both public and congressional confidence in significant counterintelligence program processes.”

The documents also charge that Rosenstein has an impermissible conflict of interest.

“His conduct in authorizing the FISA surveillance at issue in the joint congressional investigation makes him a fact witness central to the ongoing investigation of potential FISA abuse,” the articles state. “Deputy Attorney General Rosenstein’s failure to recuse himself in light of this inherent conflict of interest and failure to recommend the appointment of a second Special Counsel constitute dereliction of duty.”

Rosenstein named Special Counsel Robert Mueller to lead the Trump-Russia probe after Rosenstein’s boss, Attorney General Jeff Sessions, recused himself from the investigation because of Sessions’ own role in the Trump campaign.

Gentle readers, do you remember last month when Rosenstein appeared before the House Judiciary Committee?

CNSNews.com reported at the time that

In response to two specific questions–did the Department of Justice or the FBI spy on the Trump campaign, and did anyone in the Obama administration direct confidential informants to make contact with the campaign–Deputy Attorney General Rod Rosenstein told the House Judiciary Committee on Thursday he was “not permitted to discuss any classified information.”

“What did the DOJ or FBI do in terms of collecting information, spying or surveillance on the Trump campaign, be it via (FBI informant) Stefan Halper, or anybody else working on behalf of the agencies?” DeSantis asked Rosenstein.

“As you know, Congressman, I’m not permitted to discuss any classified information in an open setting, but I can assure you, we’re working with oversight committees and we’re producing all relevant evidence to allow them to answer this question,” Rosenstein replied.

DeSantis again: “Let me ask you this then: Did the Obama administration, anybody in the administration, direct anybody — Halper or anybody else — to make contact with anyone associated with the Trump campaign?

“As I said Congressman, I appreciate, obviously, the — I understand your interest, but I’m not permitted to discuss classified information,” Rosenstein said again.

“Well, we want the documents, and I know we’re in a back and forth on that,” DeSantis said. “But the American people need to know, were the counterintelligence powers of the Obama administration unleashed against Trump’s campaign — if that was done, was it done inappropriate?”

The smugness of Department of Justice Deputy Attorney General Rosenstein in answering the Committee’s questions did not go unnoticed by the Congressional Representatives in attendance and average Americans, who were watching the proceedings at home.

As a matter of fact, those Representatives who drew up those articles of Impeachment and average Americans have a lot in common. We all remain both disgusted and concerned about a Deputy Attorney General acting as if it was beneath him to answer questions which Congress and the American People have a right to know concerning the attempted interference in the 2016 Presidential Election by Deep State Operatives within our own government.

The Hierarchy of the DOJ, like our municipal police organizations around the nation, are supposed to “serve and protect” the citizens of our great country.

Not themselves and the Democratic Party.

The silly games which Deputy Attorney General Rosenstein and the Hierarchy of the FBI and the Special Counsel which he appointed have been playing for the entirety of the Trump Presidency became old, stale, and unappreciated by the American Public a long time ago.

A Deputy Attorney General of the DOJ has repeatedly told members of the House of Representatives that he did not know diddly-squat about the activities of those under him.

If you buy that, I would like to talk to you about purchasing a lifetime membership in the Alexandra Ocasio-Cortez Center for Rational Thought.

It is time to begin the process of restoring the System of Checks and Balances to the Three Branches of Government which our Founding Fathers so magnificently created and bequeathed to us.

Certain representatives of the Judicial Branch have decided that they outrank the Legislative and the Executive.

The Founders created all three branches to be servants of the American People.

It’s time to re-introduce Deputy Attorney General Rosenstein to a concept personified by a statue, known as “Blind Justice”.