I almost completed the Second Quest on the original The Legend Of Zelda, played a little Breath Of The Wild and Spelunker Party on the Switch and played some Cruis’n Blast at the arcade after updating it. I also played a round of Ghostbusters pinball and came away with 60 million points (not great but not totally teh suck).

Ransomware Will Decrypt Your Files If You Play PlayerUnknown’s Battlegrounds

Canned Game The Grinder Explored In All It’s Unreleased Glory

Looks Like Nintendo Is Cooking Up A Special Edition Of Donkey Kong Country: Tropical Freeze For Switch

The Ultimate Gaming Grip Gets Funded For Switch

Billy Mitchell Officially Disgraced – But He’s Fighting Back – The man branded as the “Video Gamer Of The Century” now gets to join in the disgrace of being a Florida Man who cheated on his attempts of playing Donkey Kong to keep his past glory fresh. His scores have been removed from both Twin Galaxies and the Guinness World Records; for Billy’s defense, he claims that he has documentation and witnesses to prove otherwise so we get to enjoy this little roller coaster for a while longer:

Ruh Roh As VR Faithful Start To Realize That The Hype Isn’t Matching The Reality – While I am not surprised by this video coming around, I am surprised it has happened now and not another year or two down the road. It took some courage to make this video for the guy, given he’s been building his bread and butter on VR tech. I’ve had arguments with those who are as convinced that VR is supposed to be The Next Smartphonetm and there has been no convincing them otherwise. Kudos to him for saying what most people have felt – VR games simply aren’t that fun. Especially when you consider how much has to be spent on the games after all of the hardware, only to play the game for a short time.

What the reviewer is getting at here without fully realizing it is that VR games are a lot like arcade games in where the attention span of the gamer is going. But, VR titles often lack the same hooks that keep players going on arcade machines as developers are trying to make a console experience. It’s the same reason why arcade ports at home don’t tend to sell very well – these are not 60 hour experiences. They were meant to be played in public in a social setting and in quicker chunks (for most titles). VR is also showing that is has the same problem that stereoscopic 3D had – just because you can look around with your face instead of using a thumbstick or mouse doesn’t necessarily make the game better or make more fun than playing it the normal way. 3D doesn’t make movies tell better stories…they just made more stuff slow down and fly at the user in the screen to sell the gimmick. VR lets you look around more easily and depending on the setup, you might feel like you are more immersed in a game – but that doesn’t inherently make the game more fun, compelling or better.

Part of this problem is that everyone wants/expects the holodeck from Star Trek but the holodeck was not VR (no one had to wear any tech to make it work) – it was what we call Mixed Reality (MXR) with projections immersing you in the play instead.

For VR to really stand out and make better games, you need content that is: 1) Fun to play and thus worth replaying 2) Affordable, which limits the amount of accessories you can slap onto it 3) Is something that can only be done with a VR headset. I think that the real problem here (and always has been) is #3. I see people within my industry proclaiming that this is the chance for Amusement VR to go big and steal all of the thunder as they can provide all of the accessories to properly tailor a VR experience. But the problems of hygiene, having a required attendant & cost end up holding that back too. I’ve seen VR arcade driving machines that grab attention at trade shows but there is no evidence that those games earn any better than your standard flat display games. All-in-all, it’s a shame but when you’re dealing with wearable, heavily accessorized game tech, this shouldn’t be too surprising to realize.

Conan Exiles Lands On PC/PS4/XB1 On May 8th – If you want to not just hack’n slash but also get some survival play in there, this game is for you:

Failed Super Smash Bros. Auditions – As we need some padding here and a laugh:

Breakthrough In Alzheimer’s Treatment As Gene Is Identified And Fixed

Researchers Discover How To Steal Data Through Power Lines

The Scientific Paper Is Obsolete

Laser Experiment Might Unlock A Way To Treat Tumors

Animatronics Or Androids? – You DecideTM

Staph CRIMATE CHANGE With A Goofy Face Mask! Ok, I’m being kind of facetious but you can hear such drivel going on in the background at the beginning of this promo video for a face mask that is supposed to let you breathe easy and save thousands of lives because now they are shifting from MASSIVE HEAT WAVES to polluted air. Gore must be kicking himself that he didn’t go after air pollution first…but that probably would have been too smart for him.

Space Pr0n Of The Day: Autumn Among Martian Dunes – Thanks to all of the attention it gets, we have better shots of the Martian surface than any other planet in our system apart from Earth. The HiRISE camera captured this detailed shot from Mars’ Southern hemisphere back in 2014 – almost reminds me of classic Gouraud shaded wallpaper images we saw all over the net in the late 90s(and I can’t find them now), but with more detail 😛 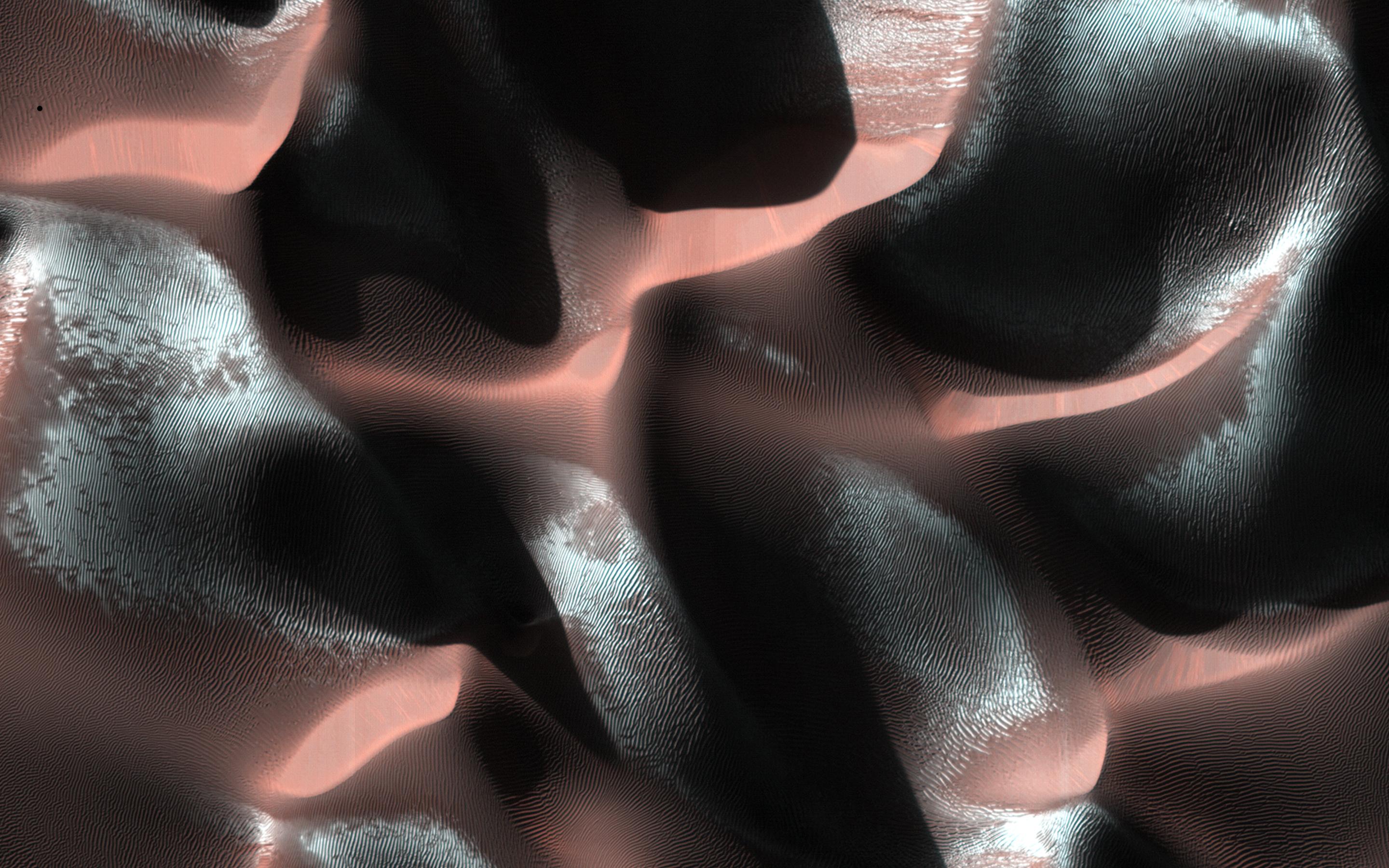