I had the opportunity to get my hands on an indie arcade game by the name of JPO IN SLC but it will only be around through the end of this week. I also repaired my Atari 7800 (which had a defunct power button) so in replaying some oldies, tested it with Rampage and Food Fight. I hope to grab a few of the homebrews made for that system in recent times (of the non-arcade ports). How about you?

Rampage Returns To Arcades As A Mediocre Ticket Video Game

Going Pro With Your Vive VR? That’ll Be $800…Just For The Headset And For A Limited Time

Stern’s “Making Of” The Guardians Of The Galaxy Pinball Video

Aforementioned on This Thread. Castle Of Heart Now Available Just For Switch

For Those Who Need More SNK Heroines Footage

Surprise! The Atari VCS/Box Is Nothing More Than A Scam – Long, long ago – sometime last year – I predicted that the upcoming “Ataribox” (Now rechristened as the “Atari VCS”, as a homage to a real console better known as the Atari 2600 VCS from 1977) was nothing more than the French-owned Atari’s attempt at scamming gamers out of their hard earned cash once again.

OK, so this isn’t exactly a surprise – Atari has made a habit out of scamming people by using crowdfunding to raise funds for stuff – but with the mock-up of the machine appearing at GDC this week, it is now confirmed. The writers over at The Register took on the Chief Operating Officer at Atari over his obvious and brazen BS over the console, which was nothing more than a mock-up with a mock-up stick. The guy in charge of it doesn’t even know what AMD chipset will be used! It is refreshing to see the press finally putting their feet to the fire and watching them become flustered – seems that they figured that this would be just as easy as scamming people out of their cash for vapor software and gaming smartwatches. Except that when you throw the word ‘console’ around, people tend to pay a bit more attention.

Atari VCS hands-on: What is this thing?

Hayden Dingman got to sit down and check out Atari’s VCS (formerly Ataribox) at GDC 2018 and walked away with more questions than answers. Supposedly it will run on an AMD Bristol Ridge A10 APU and target a wider market than Steam Machines. In this video Hayden goes over his takeaway of the console so far.

In other related news, if there are any multi-million dollar investors out there who would like to buy Atari from these inept boneheads and make me CEO of the company, I’ve got an amazing direction I would take the brand in… </shamelessselfpromo>

If it’s any consolation, Atari did bother to show Roller Coaster Tycoon for the Switch, which as you might recall had a bit of a hubbub over how Atari funded it:

Raytracing To Make A Strong Comeback With Unreal Engine 4 – Raytracing has been a holy grail of graphics since 16-bit home computers of the 80s could draw a single raytraced frame over the course of several hours. Real-time raytracing is something that platforms since the 90s could manage but not quite like the power of what we’ve got today.

2018, so a new year for Unreal Engine 4 technology to shine! A few days ago, GDC 2018 showed us how great the future of Unreal Engine 4 can look. Especially characters can look better then ever!

Fantasy Strike For The Switch – It looks like the second era of odd fighting games might be upon us. The first took place in the aftermath of the Street Fighter II/Mortal Kombat mania that swept the world in the 90s – this one seems to have taken a bit longer to get somewhere but if you’re in the market for a fighting game that isn’t a part of the 90s crowd, here you go:

We duked it out for 3 matches with 6 characters in the fighting game Fantasy Strike at Nintendo’s Nindie Showcase during GDC 2018! Guess who wins overall in this gameplay video between Andre and Tom? Hint: it’s not Tom. ——————————— Follow GameXplain!

Game Music Of The Week: Avatar Of Speed (WMMT5, arcade)  – We haven’t done one of these in a while so enjoy this high energy track from Namco’s arcade exclusive racing series, Wangan Midnight Maximum Tune 5:

Homebrew Of The Week: Stunt Car Racer (Atari 8-bit PCs) – Classic gaming fans may be familiar with Stunt Car Racer, a very early 3D racing game that graced platforms like the Commodore 64, Amiga and Atari ST. The Atari 8-bit line (400/800/XL/XE) never got to enjoy this one so a couple of homebrewers took it upon themselves to bring it along. It does require 128kb of RAM (most of the mentioned systems top out at 64k, unless you mod them. Exception was the Atari 130XE) so most will probably enjoy it in an emulator; you can grab the game here:

Plattsburgh, NY Puts The Kabosh On Bitcoin Mining For Now – They are a 21st century boom town…

Why You Shouldn’t Use Facebook On Your Phone Either – For anyone looking for a FB-like alternative, check out Mewe.

IBM Creates The World’s “Smallest Computer For Blockchain Technology” – IBM is not much of a household name anymore but they are still a big company working on a variety of tech. One of those interesting projects involved blockchain and crypto-anchor tech combined with a tiny computer. More details are here; also check out this video:

Nobody likes knockoffs. Crypto-anchors and blockchain will unite against counterfeiters.

Crypto-anchors and blockchain technology will ensure a product’s authenticity — from its point of origin to the hands of the customer. Learn more about crypto-anchors and other IBM 5 in 5 predictions at http://ibm.biz/five-in-five

Machine Solves A Rubik’s Cube In 0.38 Seconds – Take that humans…

Space Pr0n Of The Week: Going Nova – A “fresh” nova has been observed, already becoming bright enough to observe with binoculars (from the Southern Hemisphere). You’ll have to look towards the Carina Nebula (seen in the picture)…observations are continuing as this one will likely get much brighter: 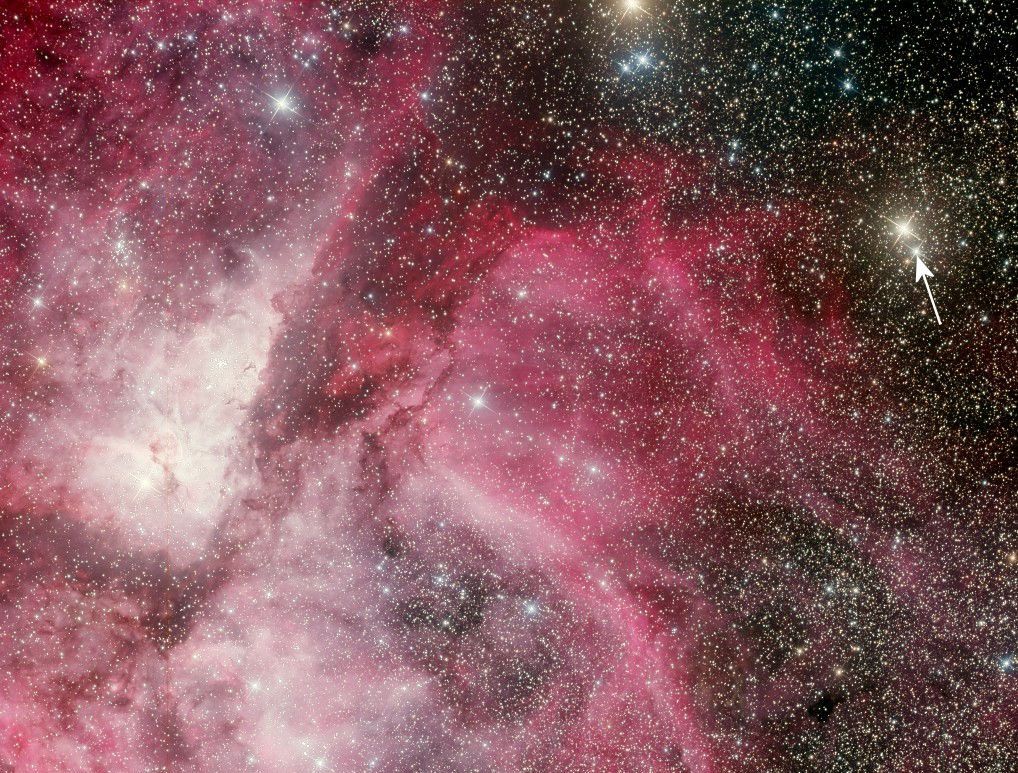