I wondered what jurisdiction Mueller was granted by Rosenstein, and I thought that I would share what I found.

On May 17, 2017, Deputy Attorney General Rod J. Rosenstein appointed Robert S. Mueller III Special Counsel to investigate Russian interference with the 2016 Presidential election and related matters. This is a copy of the appointment which spells out the specific jurisdiction of the special counsel: 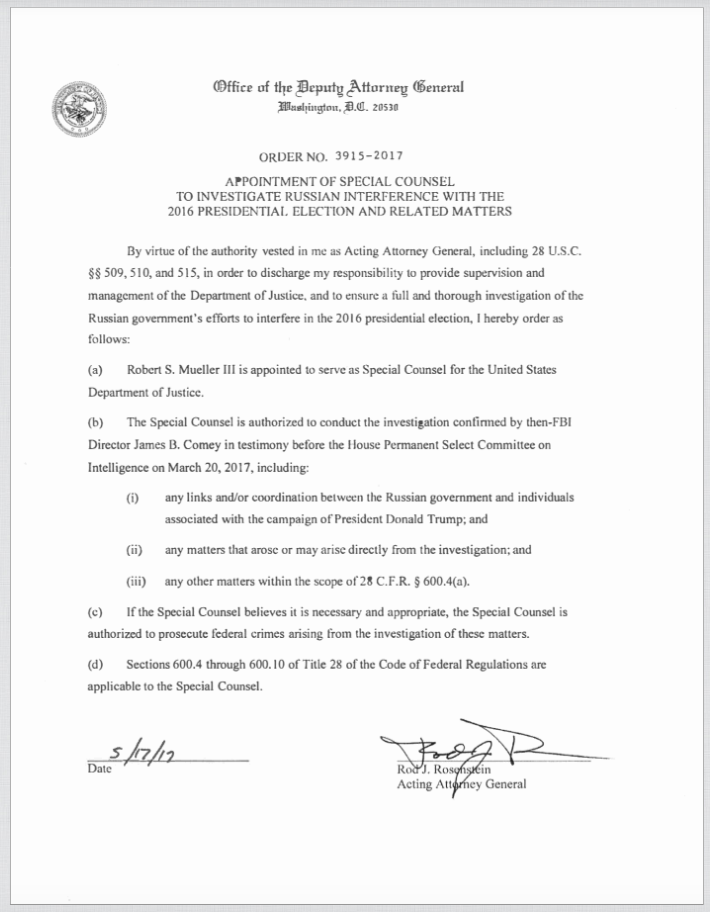 Mueller’s mandate from the above is to:

(i) investigate any links and/or coordination between the Russian government and individuals associated with the campaign of President Donald Trump; and

(ii) any matters that arose or may arise directly from the investigation; and

(iii) any other matters within the scope of 28 C.F.R. 600.4(a), (which as far as I can tell means including the authority to investigate and prosecute federal crimes committed in the course of, and with intent to interfere with, the Special Counsel’s investigation, such as perjury, obstruction of justice, destruction of evidence, and intimidation of witnesses; and to conduct appeals arising out of the matter being investigated and/or prosecuted.)

This is a quote by Rosenstein in the Washington Post the day after the above appointment:

“In my capacity as acting attorney general I determined that it is in the public interest for me to exercise my authority and appoint a special counsel to assume responsibility for this matter,’’ Rosenstein said in a statement. “My decision is not a finding that crimes have been committed or that any prosecution is warranted. I have made no such determination. What I have determined is that based upon the unique circumstances the public interest requires me to place this investigation under the authority of a person who exercises a degree of independence from the normal chain of command.”

This doesn’t look quite as broad of a mandate as it is made out to be in the Media. It certainly doesn’t look like a license to delve into completely unrelated matters or to lie in wait for an extraordinary amount of time. I’d say that the sand is running out of the hour glass for Mueller and company. Time to come clean, Mueller.