This week I logged more time on the Star Wars pinball machine and ended up playing The Walking Dead Arcade for a couple of levels and Star Wars Battle Pod for one level. I didn’t get any time to play something on the PC and only played a little Nintendo, Hyrule Warriors. I received a capture device in the mail and so experimented with that – tested that out with some Alien Vs. Predator on the ol’ Atari Jaguar, Awesome Golf on the Atari Lynx and Maniac Miner on the Atari 800XL and the aforementioned Star Wars Battle Pod (I need to find a DVI/HDMI converter for the Walking Dead). I primarily want to give it a spin on my newer arcade machines that use HDMI but it should be fun with the classic consoles.

The Popular Humble Bundle Site Has Been bought By IGN

Bungie’s Destiny 2 Is Stumbling In Sales

Hacking An Old NES Power Glove For Use On The HTC Vive – VR Saved!

Eight Minute Tour Of The Pinball Expo 2017 – The 33rd annual Pinball Expo took place in Chicago this week, bringing together plenty of old and some new pinball machines for gamers to enjoy. In case you couldn’t make it, here’s what was there:

In the first of our videos from Pinball Expo we walk from the tournaments area to the Games Hall, where we look at all the free play machines available.

The biggest announcement out of this expo was American pinball maker Jersey Jack Pinball showing off their 4th game, Pirates of the Caribbean.

Injustice Arcade Now At Dave & Busters – D&B is able to get a lot of stuff that no one else does, either permanently (like the Rock ‘Em Sock ‘EM Robots game) or temporarily. This game falls into the latter, the game reaching other venues in a different cabinet this December. More details here; and here’s a video review:

Here’s a look at the brand new Injustice Arcade Game from NetherRealm Studios and Raw Thrills. This game is a super sized version of the Injustice Mobile app with a VERY additive collectible card feature. After every game you play you get a random card.

Arc System Bringing BlazBlue: Cross Tag Battle To PC/PS4/SW – If you like 2D fighters with a little bit of a name, BlazBlue is coming back in 2018. There was a little bit of buzz in that this will be hitting the Switch as well; I think that you’ll be reading that from here on out for anything that previously was just PC/PS4 (while ignoring the poor Xbox)

「BLAZBLUE CROSS TAG BATTLE」キャラクター紹介PV第2弾！ 夢の競演が楽しめる2D対戦格闘ゲーム「BBTAG」が2018年に家庭用対応タイトルとして発売決定！ 未だかつて誰も想像をしなかったタッグバトルを楽しむ事が出来る本作にご期待下さい！ “BlazBlue Cross Tag Battle(BBTAG)” Character introduction PV The second! A dream cross-over 2D fighting game will arrive on console in 2018! Look forward to the tag team battle that no one has ever imagined!

Fire Emblem Warriors Vs. Hyrule Warriors (Graphically) – While self-explanatory, the reaction from many users (including myself) is wanting HW2 or at least HWDX for Switch. I just am not into the FE series. Although there was that one time that Koei Tecmo threw out the idea of a Mario Musou…

Thank you for watching(*ﾟ▽ﾟ*) (All my videos)→https://www.youtube.com/channel/UCbvQHCZJHHS4PJpatQGH-0w (Twitter)→http://twitter.com/zk_oj New(instagram)→ https://www.instagram.com/it.is.a.small.m.world 【I open Patreon. You can be my patreon here.】 https://www.patreon.com/user?u=9035159 New(musical.ly)https://www.musical.ly/v/MzQyMDEyNzA5MzAzNzY0MjY5NTA2NTY.html This calculator name is maybe AR-7778. and left one is AR-8001.

Homebrew of the Week: DK Jr. Game & Watch (Nintendo Wii & DS) – If you want to play the Donkey Kong Jr. version from Game & Watch (those old LCD watch games that some of us had) on slightly newer consoles, this homebrew game is where it’s at:

Wii Homebrew Game and Watch Donkey Kong Jr. In 1982 I got my first ‘handheld’ console: the G&W Donkey Kong Jr. In 1983, I programmed my own version for the TRS-80 home computer. And now I programmed this version for the Wii homebrew. A video showing the development progress of the game can be found here: https://www.youtube.com/watch?v=u77aPG7SFoY.

For whatever reason, self-driving vehicle news has really started to blow up.

Don’t Worry Citizen, The Google Mini Recording You 24/7 Is Just A Minor “Defect”

The Army’s Next Generation Of Tank Will Have Lasers

Maybe Adobe Should Kill Flash Sooner Rather Than Later

NASA And “RUSSIA” Sittin’ In A Tree, K-I-S-S-I… – The Russian space agency is called Roscosmos but the media still finds value in hysterically shouting RUSSIA every chance they get. Cuz they made Hillary a terrible candidate and not herself

The Ingestible Origami Robot – Why on earth would you want to swallow a robot? For surgery, of course! This reminds me of the ol’ but fun game by Imagic called Microsurgeon. Anyways, designed to unfold itself after being swallowed, it can then perform certain surgical tasks on a patient’s stomach. More details can be found here.

Researchers at MIT, the University of Sheffield, and the Tokyo Institute of Technology have demonstrated a tiny origami robot that can unfold itself from a swallowed capsule and, steered by external magnetic fields, crawl across the stomach wall to remove a swallowed button battery or patch a wound.

Amazon Announces The “All-New Kindle Oasis” – Yep, that’s the name they decided to go with for now. It’s got a bigger screen than before and it’s waterproof:

Amazon has launched the 2nd-Gen Kindle Oasis, but what’s new and is it worth the £229 price-tag for Oasis 2 Enjoy the video? Like, Share & Subscribe 🙂 Read more: http://www.trustedreviews.com/

Dubai Police Making Use Of RUSSIAN Made Hover Bikes – While I’m sure the brilliant minds over at CNN are hard at work to find a way to tie this to Donald Trump and “stealing” the election somehow but for the rest of us, we can marvel at the police in Dubai flying along on hover bikes.

Facebook Announces Oculus Go – In Zuckerberg’s quest to make ‘All Your Face Belong To Us’, his investment in Oculus hasn’t exactly panned out as hoped. So the next shot in the VR war for them is Oculus Go, a fabric lined VR headset for $200. It will launch next year but users will only be able to stand in one place, no walking around. Fortunately most VR games don’t let you walk around anyways.

Our first standalone product is Oculus Go-the easiest way to jump into VR. It ships early next year, starting at $199. It’s awesome for watching movies or concerts, playing games, or just hanging out with your friends in VR. http://www.oculus.com/go

Space Pron Of The Week: Puppis A Supernova Remnant – Time to gaze at the remnants of a star that exploded thousands of years ago. The exploded star remnant is in the upper right of this image while the rest of the scene involves more dust and old filaments in-between us & there (the remnant is about 7,000 light years away).This scene might have a little bit of an October vibe to it thanks to the color scheme: 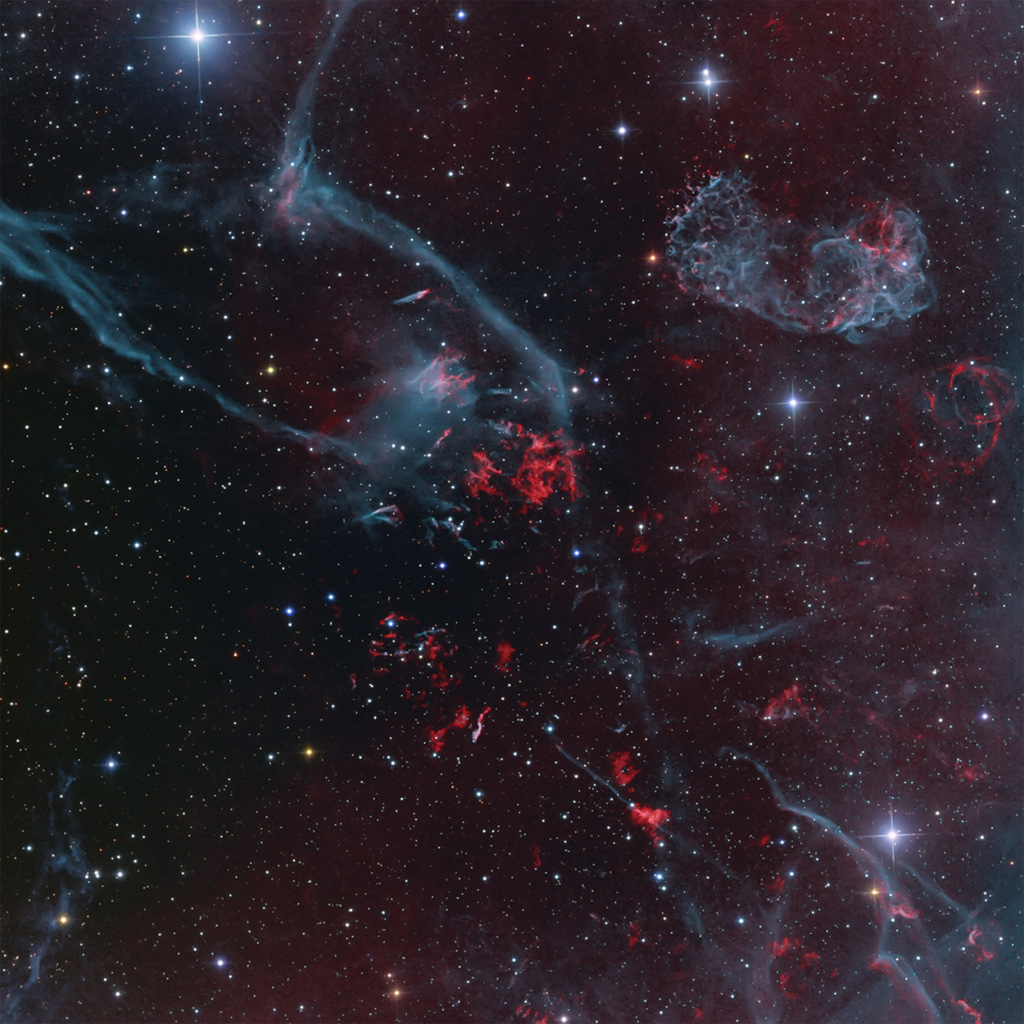