Well this past week was a doozy. Let’s escape it as best we can with veering into gaming & technology.

This week I was able to get a little more game time in on a few different consoles. Spent a little time on the WiiU playing Hyrule Warriors, Wii Sports Club with the kids & Pikmin 3 (the latter at the insistence of my baby daughter. Was certainly rusty on this one); then fired up the Wii mode and introduced my other daughter to Super Mario Bros. & Super Mario Kart. Then there was a little Dead By Daylight on PC, some River Raid on the Atari XEGS (slightly better graphics); and my business received the brand new Star Wars Pinball, premium edition. The more basic ‘Pro’ models have been out there for more than a month already but the better equipped Premiums just started shipping the week before this one.

Remember Those Pinball-Like Baseball Batting Games? They’re Making A Comeback – If you went to an arcade in the 60s or 70s, you probably played one of these.

If You Have A Switch, You Might Have Noticed That The eShop Is Getting A Lot Of New Games – Too many for my poor wallet

Darts Of The Dead? Yep, It’s Real, Just For October Though

Kickstarted Back In 2014, Unsung Story Dumps Then-Gen Consoles For Now-Gen Ones

In Case You Forgot, Super Mario Odyssey Is Coming This Month (SW)

If You Enjoy Hackin’ ‘N Slashin’ In 2D, This Kickstarter Might Be Of Interest

Bethesda Gets Political With Wolfenstein II (NSFW ads in the sidebar)

There’s still been some hub-bub this week over Cuphead but I don’t know that we really need to get into it other than to reiterate that if someone is going to choose game journalism as their career, they should have adequate skill at games (such as being able to complete a game without cheats) to be able to review them. It’s no different than expecting a book reviewer to have decent writing skills (and the ability to read) or a surgeon from being skilled at his craft. But SJWs are snowflakes, only wanting people to be rewarded for how hard they tried instead of skill crafted through practice.

Jurassic World Evolution Game Footage (PC/PS4/XB1)- It’s looking pretty so far but don’t expect to understand how the game actually plays from this trailer. Given the enjoyment of the video showing the helicopter flying around all over the place, maybe it’s like good ol’ Desert Strike 😛 I kid, it’s a theme park simulator kind of game, so it’ll be more good ol’ Theme Park on steroids.

Capcom Announces Street Fighter V: Arcade Edition (Arcades in Japan/PC/PS4/XB1) – Since Marvel Vs. Capcom Infinite is a total bust, might as well go back to Street Fighter for sales salvation. Japanese arcades will be getting the game but as usual American arcades won’t; mainly because the game isn’t being released as a hardware kit but as a digital download (which network we don’t really have here). Fans are happy since this is a ‘mode’ that should have shipped with the game in the first place.

Prepare yourselves, Street Fighter V: Arcade Edition is coming out on January 16, 2018! If you’ve been spectating from the sidelines or are waiting for a reason to join the fight, now is the time! In addition to the highly-requested Arcade Mode, Street Fighter V: Arcade Edition contains a bounty of new features, including Extra Battle Mode, Gallery, a redesigned UI, and more!

The Nintendo World Championships 2017 Event – The modern revival of Nintendo’s World Championships took place this past weekend, allowing gamers to live their dreams of being like The Wizard. If you missed it, all 5 hours of the event (including footage from upcoming titles like Super Mario Odyssey) are all here to enjoy:

God Eater 3 Announced – Not long ago I was playing God Eater 2 Rage Burst on PC with some friends so seeing this in my feed stood out. I’ll be honest though, I got a little bored with the game pretty quickly as it felt quite repetitive in play and in the static, not terribly large environments.

Game Music Of The Week: Printer In Hell (original Doom, PC): You’ve likely seen this sort of thing before, back when tech was not as advanced as it is now but designers seemed to have more fun in adding Easter Eggs or features into things that admittedly are a pointless beyond entertainment value.

In case your soundblaster was correctly configured and you played DOOM it was possible your printer did something like THIS! Composed by Bobby Prince, DOOM was published by id Software 1993 Thank you!

Homebrew of the Week: Kraut Buster (Arcade/ Neo Geo AES): Not sure if this should be considered a “homebrew”…maybe more of an indie title. Heavily inspired by the likes of Metal Slug and Contra, we finally have an update on this run’n gun shooter after a long hiatus in news about it. And before any SJW gets their soiled panties in a wad about the name, the developers are German, naming it Kraut Buster in some self-depreciating humor. This is slated to launch Q1 2018 and will be sold as a Neo Geo MVS cartridge to be able to grace arcades that still have an MVS machine sitting around.

Quick info: Youtube allows only 5000 characters. For detailed information about the game’s status/development please read the shop newsletter or look on our facebook account https://www.facebook.com/ngdevteam We kept the video intentionally short as we don’t want to spoiler too much of the game.

Why Does Anyone At Yahoo Still Have A Job/Why Does This Company Still Exist?

Intel’s Answer To AMD’s Ryzen Getting Plenty Of Praise

EasyJet Wants To Fly With Fully Electric Planes In 10 Years

Well, That Purchase Of An Internet Webcam Got Creepy Fast

The blog covered Google’s smartphone announcements in a bit of detail this past week so no need to go over all of that again.

Speaking Of Creepy Cameras, Here’s The Lookout Charger Camera – In case you want to spy on everyone around you, there’s the stealth camera that looks like a phone charger. All righty then…

1 HD Hidden Security Camera + Phone Charger LOOKOUT CHARGER is a surveillance camera designed into a regular phone charger. It is first security camera that is easy to use and packed with all the necessary capabilities: – 1080P HD Video and Sound – Undetectable (no pin, no SD slot or obvious signs this has a camera inside it) – Up to 32GB Built-in memory – Functions as a Phone Charger for all iOS, Android devices!

The Harvest Right Freeze Dryer – With all of the disasters in the news as of late, I imagine that emergency preparedness companies are seeing an increase in business. At least, I would hope that more people would start to take the idea of being ready for anything a little more seriously. Enter in the Harvest Right freeze dryer. I understand that they aren’t exactly cheap but if you have a family to feed and don’t want to rely on waiting for a FEMA truck or a charity organization to drop by your area with a little food, it becomes a great solution for preserving food:

How to Freeze Dry at Home – Freeze Drying Overview

Want to know how to freeze dry at home? This videos shows every step of the freeze drying process so you can see just how easy it is to preserve your food for years to come. Have you heard of a Harvest Right home freeze dryer and wondered what freeze drying really is?

Mixed Reality HMDs Picking Up Steam – These look more like VR headsets but they “mix” the reality by using cameras to capture the outside. You can think of this as a step between what HoloLens is supposed to do and what VR does. Multiple companies have already announced headsets so we’ll see how this round of wearable gaming goes – without compelling apps, it’ll be another moot point.

Space Pr0n Of The Week: Space Salt – There are tons of craters out there, enough that most aren’t anything really special. A small rock slams into a bigger rock and a pit is usually all that is left afterwards. Things are a little different on the dwarf planet/asteroid Ceres however, which has a number of odder than usual craters including the now famous Occator Crater. From Earth, we can see the bright white spot on Ceres from here but it took Dawn to get up and close to see what it was made out of. The culprit – salt. 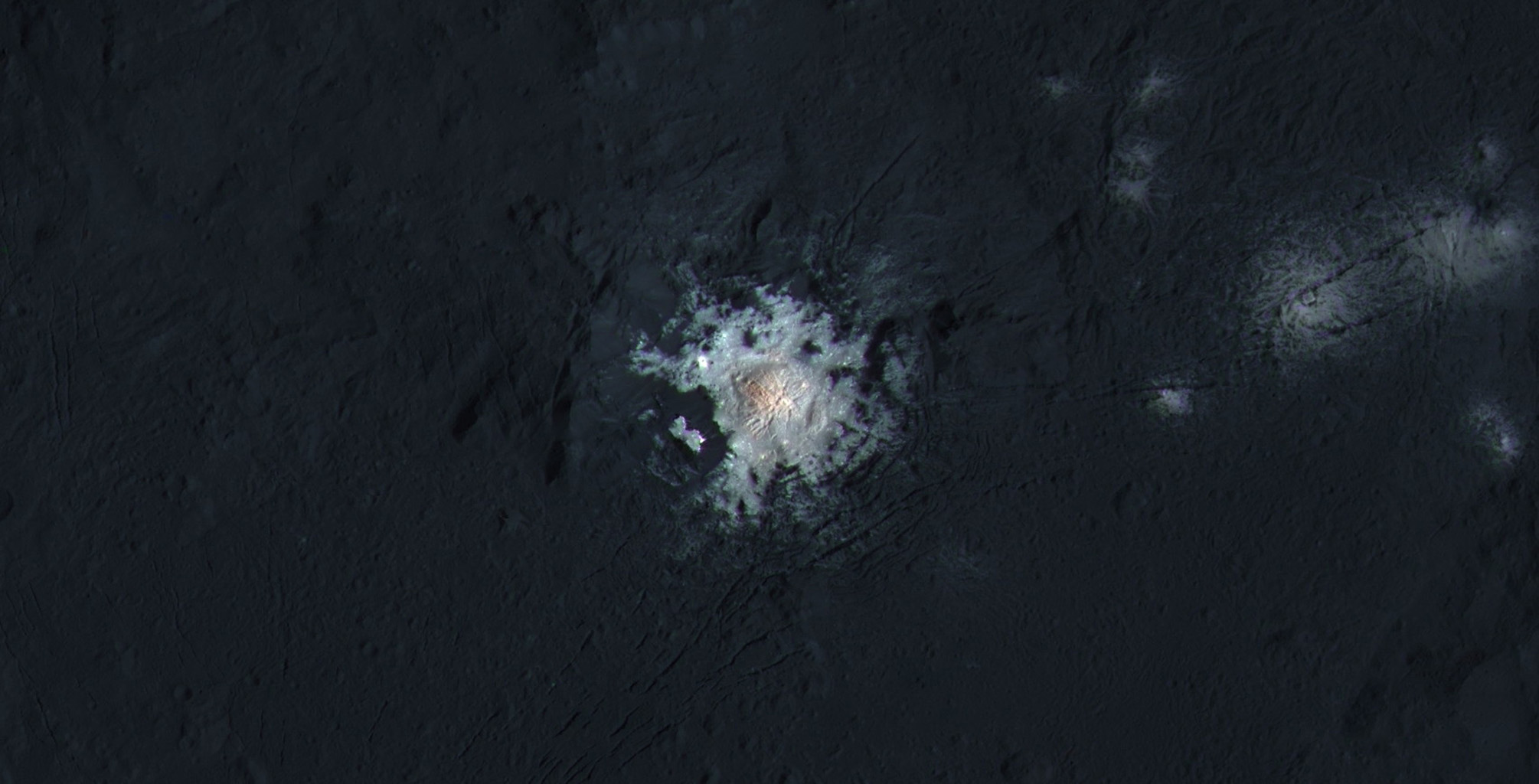