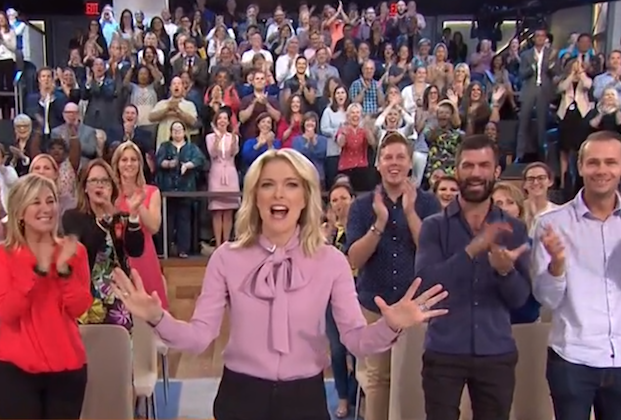 After the dismal performance of Megyn in the summer with her Sunday night show, NBC realized they had an $18 million bust on their hands. Megyn 2.0 was no different than the Fox 1.0 version. New personality and likability updates had to be developed and installed.

The reboot to Megyn 3.0 began with a major public relations effort to show her in a new light. The goal was to “humanize” Megyn, to erase the image of her being a “bitchy ex-wife”, a “hated mother-in-law” type,  a “back stabbing” media personality,  and someone who would walk all over another to gain any advantage to get ahead. This was a tall order indeed.

The likability tour utilized such gimmicks as an overnight camping trip to the woods, but done so using a 35 foot RV as a part of the trip. Fake camping or “glamping” at its finest.

Next, Megyn would toss out the first ball in a baseball game. Of course, no major league team would have her so she did it for the Durham Bulls, a minor league team to match her minor league personality and media career.

Megyn would also appear with Kathie Lee and Hoda, on their NBC morning program. Of course, she could not even do that right, snubbing and ignoring Hoda during the program.

“They do themselves no service with that tactic.”

Nowhere does Megyn admit her own culpability and bias in the attacks against Trump.

All in all, the “likability tour”, just like Megyn, was a fake and a failure.

The Premier Episode of Megyn Today

The show began with Megyn offering her reasons for wanting to do a morning type of show. She wanted to do something “uplifting” hopeful, and inspirational……can anyone say Oprah?  I think not.

Megyn then goes on to state that she wants nothing to do with politics…..of course she would not after getting scholonged by President Trump time and again, and then proving that she was nothing more than a phony media hack who had no ability to do the work of a reputable journalist.

Of course, this was only the beginning. Time and again Megyn would attempt to hawk her book, “Settle for More”, stating that “more” meant more time with her family and “joy” in her life.

With Megyn, one must wonder why she would not mention the true meaning of “more”….more money…..$18 million contract and $10 million advance on her book.  Guess money has no meaning for her.

As if all of this was bad enough, there had to be the “humanizing and likability” moments, or as it should be known, the “nauseating” moments.

Megyn will likely retain many of the same viewers who watch the lead-in shows, but she will lose significant numbers of those who supported Trump based upon her treatment of him during the election. Voters have long memories.

Don’t expect her to expand the audience viewership. There are just too many people who don’t care about her, and have no interest in watching.

The attempt to emulate the Oprah show will fail in its entirety. One has to have at least an air of sincerity to pull it off.

After watching the first episode of Megyn Today, I am wondering how I ever get this wasted hour back in my life. Could I bill her for my time? Nah, she is a former attorney……not worth the time and effort.