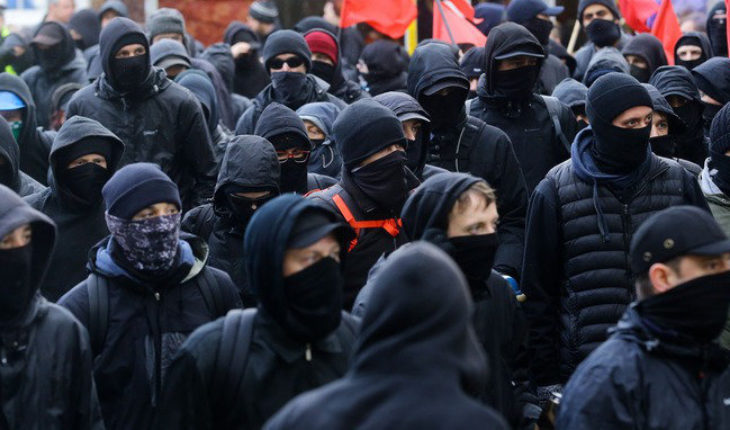 It’s time to face reality. The world is on the brink of a tipping point that will decide the fate of our children and grand-children forever. And this time, the focal point is right in America.

Students of history, particularly the history of the twentieth century, are well aware of the two most important events of that hundred-year span: World War II and the Cold War. In both cases, the lines were clear-cut, unambiguous, and diametrically opposed. On the one side, you had the forces of despotism, overwhelming everything in their path through fear, intimidation, and military might. On the other, you had freedom and liberty, unwilling to go to war but doing so out of necessity to preserve those values most dear to them.

And in both cases, the forces of freedom won, first when the Nazis and Japanese surrendered in 1945, ending the most devastating conflict in human history, and in 1989, when the Berlin Wall came down, signaling the beginning of the end for the Soviet Empire. America fought, as it always has, on the side of freedom, and as it always does when it is united and strong, America won.

The left knows that its greatest enemy is America, especially an America that believes in God. And so, for the past fifty years they have been doing everything they can to separate America from God, and to separate the American people from their own heritage.

How many students in school today can name three Nazi leaders other than Hitler, or even know that the Soviets starved millions of people in the Ukraine between the two World Wars? The New York Times still proudly displays the Pulitzer Prize won by Soviet apologist Walter Duranty, who blatantly lied to the American people about what was happening under the Stalin regime.

Now we see the fruits of their efforts to erase the history of their own movement in order to build it anew, in the belly of their greatest enemy, America. The modern left is more in turn with Sharia law than they are with the Constitution. And now, after decades of disguising their intentions under the umbrellas of ‘civil rights’ and ‘income equality,’ the masks are off… figuratively, at least, replaced with the literal ones of the Antifa movement.

In the wake of the Charlottesville protests, it’s time to take a long, hard look at what the left in America is truly doing. ‘Antifa’ are nothing more than the new Brownshirts, ready to disrupt and destroy at their paymasters’ beck and call. The media pretends they are simply concerned citizens, while left-wing politicians ignore them or downplay their activities.

Black Lives Matter, a blatantly racist hate group, is much the same. Berkeley, Ferguson, Charlottesville, San Diego… the list of incidents is growing, and America is beginning to simmer.

“The receptivity of the great masses is very limited, their intelligence is small, but their power of forgetting is enormous. In consequence of these facts, all effective propaganda must be limited to a very few points and must harp on these slogans until the last member of the public understands what you want him to understand by your slogan.”

Adolf Hitler wrote those words in Mein Kampf, but they could easily be placed in the mouths of today’s media moguls like the Murdoch boys, or Jeff Zucker. How else do you explain the media’s lockstep ‘reporting’ of the exact same phrases on a daily basis? Rush Limbaugh regularly presents montages of reporters saying the exact same things over various networks, the most famous example being the ‘Dick Cheney provides gravitas’ montage back during the 2000 election.

To this day, if you take a transcript of each of the nightly news broadcasts, rearrange them so the stories are in the same order, then take out the names of the news anchors, you cannot tell the difference between them. It’s propaganda, not news, and there’s no point in pretending otherwise.

And so, we come to the crux of the matter: Everything America fought against in the 20th century is coming back in its own heartland, as the left does its best to nullify its only true opposition.

Europe is virtually lost to socialism and Islamic invasion; South and Central America are bastions of leftist dictatorships; Russia is rumbling like the Soviet Bear once again, and China is trying to take over the world’s economy.

And the Catholic Church, which led the fight against the Soviets in the 1980s under St. John Paul II, has become divided by a controversial, political Pope who has been unable to rise above the media’s constant distortions to be the leader needed in the world today.

The left has dropped the mask of respectability and put on the mask of violence. They’ve upped the rhetoric to a point the Nazis would have been proud of. They celebrate BLM and Antifa as heroes of their generation.

Will America stand up against the tyranny of the left and drive them to Hell where they belong?Click To Tweet

The drumbeat of fascism has once again been sounded, and its adherents are the ones claiming to fight against the fascism they truly represent. Aided by their willing accomplices in the media, the New Brownshirts have begun their march toward a new Krystallnacht. And just as people shut their eyes to what was happening in Germany during the lead-up to World War II, so to have people today been unwilling to recognize the evil that is arising in their own communities.

And it IS evil, and must be named as such. The left has made it clear: There can be and will be no compromise; their goal is exactly what it was in the twentieth century: domination of the entire world, and the jackboots of fascism and communism across the throats of every single person on the planet.

Their words are couched in such soft-sounding phrases as ‘equality’ and ‘free speech,’ but their actions speak far, far louder than words.

In both of the great conflicts of the 20th century, America was blessed with having the right leader at the right time. Roosevelt, no friend to the conservative movement, nevertheless was the right man to lead America through World War II, because he foresaw the inevitability of conflict, as opposed to the political leaders who believed they could remain isolated across the Atlantic and leave Europe alone. Had they prevailed, the Nazis would rule the world today.

And of course, Ronaldus Magnus, the greatest president of the twentieth century, a man who stood firm for freedom and rejected the common wisdom that the best America could hope for was co-existence with the Soviets. He didn’t play for the tie, he went for it on fourth-and-goal and did what had to be done. Together with St. John Paul II and Dame Margaret Thatcher, Reagan shaped history by leading America back into greatness. And today, the left hates him for it, because he defeated their Utopia, the Soviet Union.

Now, Donald Trump has been given the task of leading America through its most dangerous time since the mid-nineteenth century. America is once again on the brink of a civil war, not over the freedom of slaves, but over the imposition of slavery on its people by the monolithic, faceless and fascist left.

It is a war that America must win, a war in which the American left must be defeated as thoroughly as the Nazis in 1945. There can be no compromise, no appeasement, no negotiations. That stage, if it ever existed at all, is long past. The left will not stop, will not back down, will not compromise in the slightest; we are their enemy, and it is time that we recognized that truth, and time the President does, too.

That is why I am no longer giving any liberal the benefit of the doubt. They treat us like absolute crap and hold us in contempt because we refuse to march in lockstep with their new Brownshirts. So be it; the time has come to give back what they dish out. There is no longer an excuse for ignorance on the left; they are willingly blind to what they are being manipulated into doing, because they enjoy doing it. They thrive on the hate and violence, they revel in the power they think they wield, and they salivate at the thought of hurting us.

No more. They act like Nazis, they must be treated no differently. They doxx people who don’t fall in line; the same must be done to them. They bring sticks, bats and body armor to ‘protests’; time to fight fire with fire. It’s only a matter of time before they actually do kill someone, as that I-shall-not-remember-his-name Bernie-supporter tried to do to Steve Scalise and other Republicans.

Sooner or later, they will succeed, and the conflagration they think they want is going to explode all around them, and they are going to wake up the sleeping bear just as the Japanese did at Pearl Harbor.

It’s time, America. Time to stand up and live up to the legacy given to you by generations of men and women who believed in freedom as strongly as the left believes in their fascism. They were willing to die to preserve those freedoms; the American left has shown that they are willing to kill to destroy them.

Will they be allowed to win, or will America stand up against the tyranny of the left and drive them to Hell where they belong?

The time for pretending is over; the time for hoping for a peaceful resolution is done. They want a war; they crave it like a starving dog looking at a steak. They no longer see us as fully human, and we all know what the fascists did to people that weren’t considered fully human.

Make your choice, America: Fight, or die. The status quo cannot stand, not any more.