So long July, we hardly knew yet. Here are the latest headlines and videos from the world of video games and technology. Here you can feel free to take a break from the daily soap opera of TRUMP IS TEH GREAT/TRUMP IS TEH SUCK that is constantly going on.

Some of my gaming has been the same as previous weeks: God Eater 2 Rage Burst(PC), Implosion (SW) and enough Splatoon 2 to reach level 3. But I was able to get a little extra gaming in on the new arcade machine I got my hands on, The Walking Dead (shown below). My daughter and I also played some oldies on the Atari 2600 together – Skydiver, Asteroids, & Star Wars: The Empire Strikes Back.

Another Game Dev Seeks To Resist Trump, This Time Over The Restoration of Banning Transgender Members

In Case You Just So Happen To Have A Vector Display Lying Around, Check Out XYScope

Reminder that if You Buy CoD: WW2, You’re Supporting Numbnut SJWs Who Call Their Fans Racists Over Wanting An Accurate Portrayal Of History

More Hey! Pikmin Footage (Nintendo 3DS) – I wonder what they are waiting for re: Pikmin 4

Sealed Copy Of SMB Sells For $30k – And that’s why game stores charge dumb prices for super common games like this (as recently seen at a game store in Idaho):

Unboxing The Walking Dead Arcade Machine – Normally I don’t care for unboxing videos but I like to think that this is a little more interesting than opening up a game box for something you bought at the store. That and in the interest of disclaimers, I made this video so shameless self-plug ACTIVATE! :

http://arcadeheroes.com – Ever wonder what it would be like to receive an entire arcade machine and get it from the box to installed? That’s what I do here (in hyperspeed), from removing the box to having a playable, full-sized arcade machine. Let’s unbox and install The Walking Dead Arcade!

New Mario Kart Arcade GP VR Footage – Bandai Namco has launched a new VR-centric game facility in Japan by the name of VR Zone. They have intentions to expand it to various sites around the world but for the moment, you can only experience the games at VR Zone Shinjuku. There are several unique titles to enjoy but the one that is soaking up 99% of the attention is Mario Kart’s first foray into VR. This is also based on Mario Kart Arcade GP DX which has been available in arcades for a couple of years now.

Gran Turismo Sport Single Player Modes (PS4) – I’ll admit it, I never cared for Gran Turismo…I played one of them on the PSX and another on the PS2 but I suppose that arcade racers “ruined” simulator style racing games for me (about the time I played GT I was into games like SF Rush 2049 and Hyperdrive). It still remains a popular IP however so I am sure it will do well on the PS4 when it released this coming October.

http://www.playstation.com/en-us/games/gran-turismo-sport-ps4/ Let’s play Gran Turismo Sport on PS4 Pro! Today we buckle up and try our hand at a variety of the single-player modes coming to GT Sport, including bite-sized missions and driving school challenges designed to help you master the race track.

Battle Chasers: Nightwar (PC/PS4/SW/XB1) –  This turn-based combat RPG is aiming for JRPG style play and is coming to pretty much every modern device. You’ll be able to apparently chop the heads off of werewolves come October 3rd:

Ready Player One Trailer – I haven’t read the book and Spielberg is out claiming that VR is the future like every other celeb enamored with tech that they don’t fully understand. What do you think of this upcoming film?

Game Music Of The Week: Windjammers – Reach For The Top (Arcade) – We’re still in the middle of Summer so why not something that sounds like it belongs to the season?

Homebrew of the Week: Beer Belly BIll In: Grillieren! (Commodore 64) – Having an odd path of releases for the Game Boy Advance, Nintendo Wii and Android devices, it is now coming to the old Commodore 64.

Way back in 2006 a coder by the name of Widdy released a rather charming little game called Beer Belly Bill In : Grillieren! Barbecue Deluxe for the Gameboy Advanced, with later ports to the Wii, Android and even Java.

The $10B Foxconn Plant Going Into Wisconsin Gives Canada The Sadz – How does our economy taste now, ya hosers?

Adobe Flash Getting Sacked By 2020 Is Not (For Now)

Ryzen 3 Launches to Compete With Intel’s i3

In Other Words, A Dr. Doolittle Reboot Will Happen In About 10 Years (Animal Translator tech)

3D Printing For Facial Reconstruction – The Quality Of Life improvements that 3D printing continues to offer just keep on stacking up. GE Reports has a story about Dr. Lantieri who is using 3D scanning & printing to come up with solutions to repair bone damage, particularly in the skull. Some of it includes Wolverine-style titanium replacements although I doubt anyone will be installing titanium claws in their hands anytime soon:

AMD Unveils Their Vega Graphics Hardware – AMDs ‘high-end’ graphics hardware has been teased since they did their official unveil of the Ryzen CPU series and with SIGGRAPH 2017, they’ve pulled the curtain back on Vega. It starts at $499 and they also have introduced a ‘holocube’ device that provides real-time data on the GPU. I personally never go for the latest graphics cards as a generation or two past works fine for me for some years but if you’re loaded and building a new rig, new launches have you in their sights

“Vega” has landed: hear about some of its best features and learn why it’s the GPU for you from Ubisoft, Bethesda, gamers and more.

Haptic Feedback Via Sound – I’ve heard of using small speakers + high frequency sound to create haptic feedback but commercialization of the tech seems to be running along slowly. At SIGGRAPH 2017, the University of Tokyo had a demo of such technology setup. VR could get some use out of it but I could see an arcade game also being able to work with such technology.

and Leap Motion (and tracking markers). Watch the screen in the background to see what he’s seeing. From Tokyo University shown at SIGGRAPH 2017

Tesla Model 3 Unveiled – While it is claimed to be selling at $35,000, an electric car fanboy on my FB did some math from what was revealed at this event and figured that it would end up costing $49,000 after all of the promised bells & whistles are thrown in, possibly higher (extras include the self-driving feature, auto-pilot feature; charging station for your house, etc).

Tesla’s given us a glimpse of its latest Model 3, and it’s packed with slick improvements. The sensational ride handles itself quite well on all types of terrain. The interior matches Tesla’s exceptional style.

Tally – The Grocery Store Robot – Like the continued automation of jobs or not, Tally has already been placed on locations in many stores across the country.

Tally is the world’s first robotic autonomous shelf auditing and analytics solution. The solution consists of one or more mobile robots that can autonomously traverse large brick and mortar retail environments to capture, report, and analyze the state and availability of merchandise and help ensure compliance with the store’s planogram – the ideal placement of products on shelves in order to maximize sales.

Here’s an album of images and a writeup of the gun http://imgur.com/a/tR35G Heres the schematic for the tesla coil https://www.stevehv.4hv.org/VTTC5.htm Ill be doing a build video of this in a few weeks due to popular demand!

Space Pr0n of the Week: Close-up on the Pinwheel Galaxy – When it comes to our galactic neighbors, most people think about the Andromeda Galaxy but there are other galaxies that are “relatively” close (astronomically speaking). The Pinwheel Galaxy (M83 for the boring name) is a mere 15 million light-years away and seems to be a standard, run-o-the-mill galaxy with millions of stars, plenty of nebulae and supernova remnants. This shot of the galaxy was taken by the Hubble shortly after it had received some camera upgrades about 10 years ago: 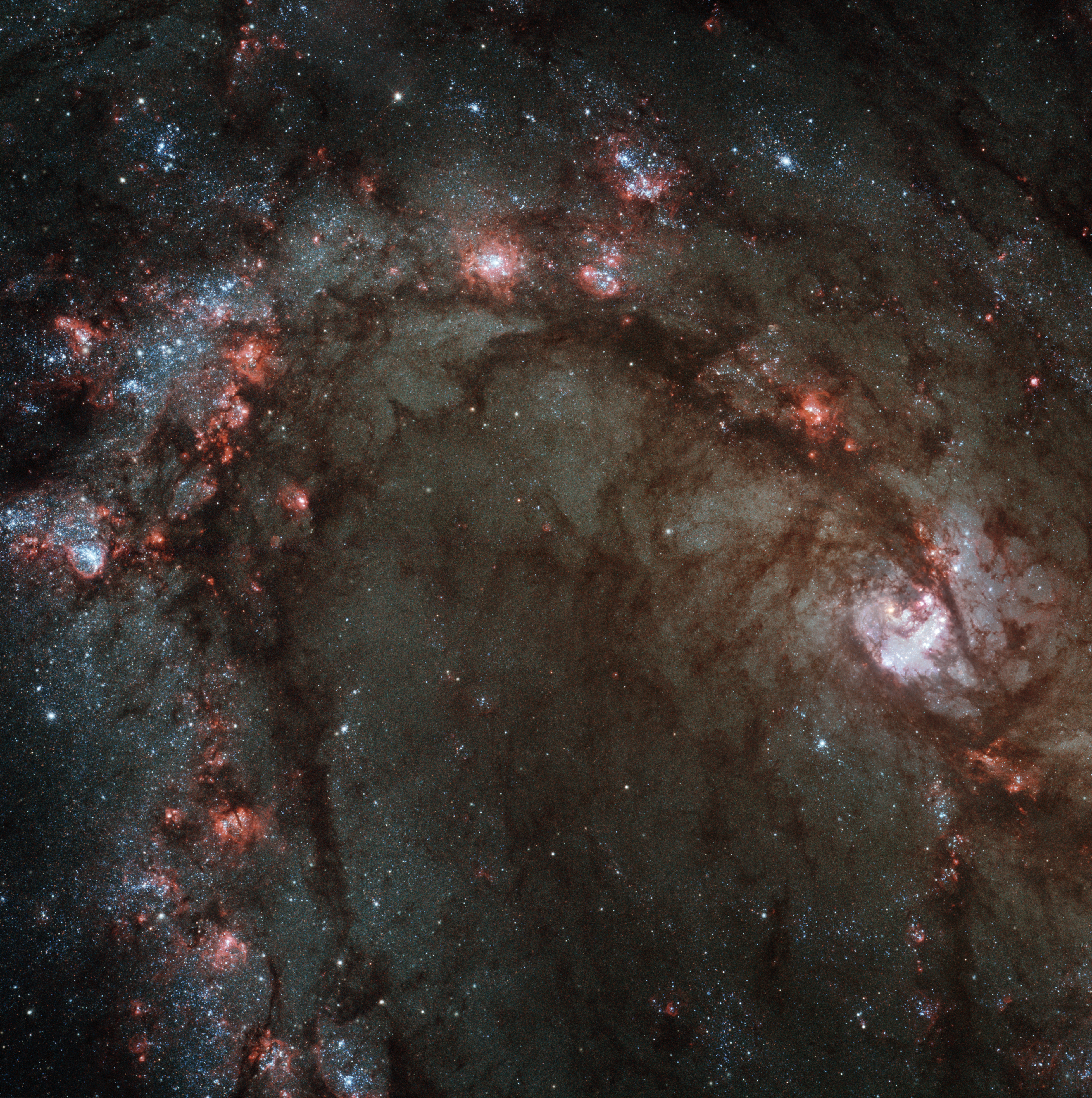